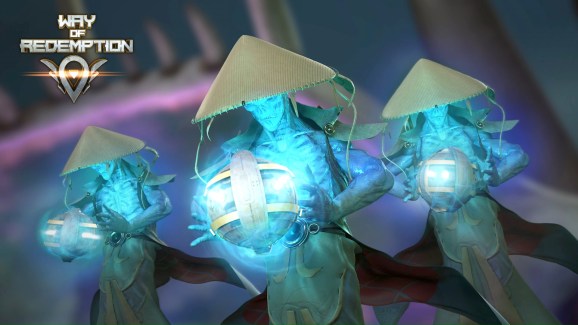 Way of Redemption is a literal interpretation of the term “esports.” It’s a fantasy-themed arcade sports battler that pitches players against each other in a Windjammers-esque duel. It’s the latest game from developer Pixel Cream, and it will be out for PC and PlayStation 4 on November 7.

Pixel Cream describes Way of Redemption as a “multiplayer online sports arena,” a play on the multiplayer online battle arena genre. Players can compete in matches that are either 1-vs.-1 or 2-vs.-2, and both online and local multiplayer are available cross-platform. Each team attempts to punt a glowing orb into their opponents’ goal in order to score points. Ranked leagues also provide leaderboards so players can see how they stack up against the competition.

Way of Redemption has seven available characters. They’re inspired by various mythic traditions or come from fictional spacefaring civilizations. One character is described as hailing from the Large Magellanic Cloud Pantheon, and another is a demigoddess who was bitten by Fenrir from Norse mythology. Each has different “talents” or skills that are selected before each match. All the characters have to redeem themselves in the eyes of the gods, and to do so, they compete in what seems like high fantasy dodgeball.

It’s the latest creative twist on sports games. Other innovations in the space include Psyonix’s cars-playing-soccer mega-hit Rocket League and Supergiant Games’s Pyre, which has a similar premise around exiles attempting to win their freedom by playing a surreal sports game.