Star Trek: Bridge Crew is great in VR because it feels authentic 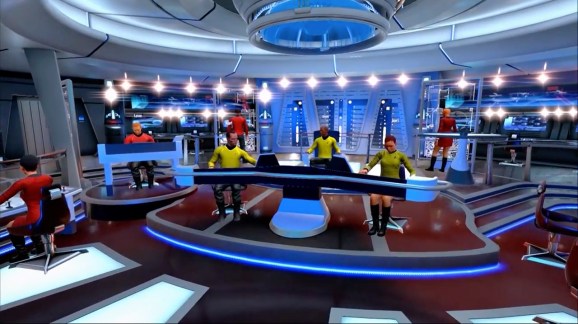 That last point — authenticity — is the goal behind Star Trek: Bridge Crew from Ubisoft and Red Storm and from everything I’ve seen thus far, they’ve absolutely succeeded. In the two videos below you might notice a slight echo — that’s just from us recording both in-game voice chat and spoken voices from the room. The actual game doesn’t have any echo problems.

The first time I played Star Trek: Bridge Crew at E3 last year I was blown away (it was named our favorite multiplayer game at the show) and it continued to impress us when we tried again at Gamescom later last year. Last week at a visit to Ubisoft’s San Francisco office we got the chance to play it once again, but this time with three of the four chairs filled by the Upload team and we flew both the new Aegis and the original Starship Enterprise.

The great thing about Star Trek: Bridge Crew is that even though it’s an incredibly faithful adaptation of what it means to be on the bridge with your team, it doesn’t actually require any prior knowledge of the show. During the opening Starfleet Academy training I sat in the Tactical Officer’s chair, in charge of combat systems, defenses, and scanning operations, our editor-in-chief Tal Blevins was in the captain’s chair, and Upload’s video producer, Azad Balabanian steered the ship as the Helmsman. The fourth slot — Engineer – was filled by a member of the Red Storm development team.

My training covered all of the basics that any good Tactical Officer needs to know: how to arm and fire torpedoes, shooting phasers, activating shields, scanning ships, and other related tasks. The UI is much improved from the last time I saw the game with a more intuitive layout and clearly defined tasks for each area of the panel.

All of the crew on the Aegis has a large display in front of them that has various touchscreen sections. Our first mission was to visit a system and scan escape pods looking for signs of life then beam those survivors onto our ship. Just like the game itself it was simple in concept but became immediately more complicated and intense once things started rolling.

In other cooperative games there are strictly defined systems in place that govern how and when players can interact and affect the game world. In the case of Star Trek: Bridge Crew though, it’s a much more flexible environment. When the Captain issues an order to open fire on the Klingons you don’t “lose points” for ignoring him, but may earn the disdain of your comrades when your ship explodes from losing a battle. Every member has to operate in unison to achieve victory and it’s insanely rewarding to successfully complete a mission together.

For example, in the heat of battle the Engineer may need to make sure the shields have power during a fight and the Tactical Officer has to make sure the shields are on to boost our defenses, as well as maintaining fire on enemy vessels. The Helmsman will maneuver the battlefield while the Captain keeps an eye on the objectives and keeps us on track. Even though there was no strict system in place that forced me to wait for my Captain’s orders I found myself inclined to wait and act only when instructed.

While the main focus of Star Trek: Bridge Crew is the new Aegis ship, during our demonstration we also got the chance to go hands-on with the classic original U.S.S. Enterprise from the very first Star Trek show. The game’s campaign mode can only be played with the Aegis, but the randomized mission mode can be played using the newer ship or the Enterprise. For our second mission we fired up the original and took her for a spin.

At first you’d think changing ships wouldn’t result in a major difference in terms of actual gameplay, but it actually ended up feeling like a completely separate game for all intents and purposes. As the Tactical Officer my futuristic AR-esque panel was replaced by a slab with brightly colored buttons that looked more like pieces of candy than tools for deep space exploration. This is of course intentional as the Enterprise in Star Trek: Bridge Crew is designed to look exactly like it did in the original show — ’60s cheesiness and all.

Using my Oculus Touch controllers I could press a button to display hovering text over each option to show potential choices, which is a necessity given how complex the new interface is. Instead of sliders and diagrams to arm and fire torpedoes I’ve got individual buttons. Instead of monitoring how long is left to arm and charge weapon systems I just mash them repeatedly until they do what I want. It felt like I was sitting in a cardboard spaceship as a little kid, pretending to be an astronaut. The screens on my right show exaggerated lines and colors, as if it’s a fantastical pretend version of the future.

As a crew, we fond ourselves communicating far more in the original Enterprise than we did in the Aegis and everything just felt more frantic, chaotic, and fun. Information was much more scattered and difficult to decipher with fewer displayed systems and screens. Between myself and the Helmsman, for example, was a single large shared radar panel that the Captain also used.

The difference between flying the new, streamlined Aegis and the clunky, obtuse Enterprise is like the difference between driving a smooth, electric automatic car and an old, stubborn manual transmission pickup truck. They’re both vehicles that are designed to do the same general thing but feel completely different with unique quirks once you get behind the wheel. The Aegis was much easier to learn quickly, but with a good crew of friends, I could see the Enterprise becoming a favorite for repeated voyages. It just feels more authentic.

It might be sporting a simple premise, but Star Trek: Bridge Crew is an absolutely dense and complex game. Between the four different positions, single player and cooperative multiplayer, full campaign mode, and randomized voyages with two totally different ships and multiple mission types, the game has a lot to offer.

Star Trek: Bridge Crew is set to release on May 30th for Oculus Rift with Touch, HTC Vive, and PlayStation VR (PSVR) with full cross-platform multiplayer. If you’re itching to see more, check back at UploadVR because we’ll have a full gameplay video of our complete mission aboard the Starship Enterprise later this week.

This post is part of the PC Gaming channel, presented by the Intel® Game Dev program.

Agriculture Institute for Development and Training Programs Agricultural practices are emerging worldwide although we have many...