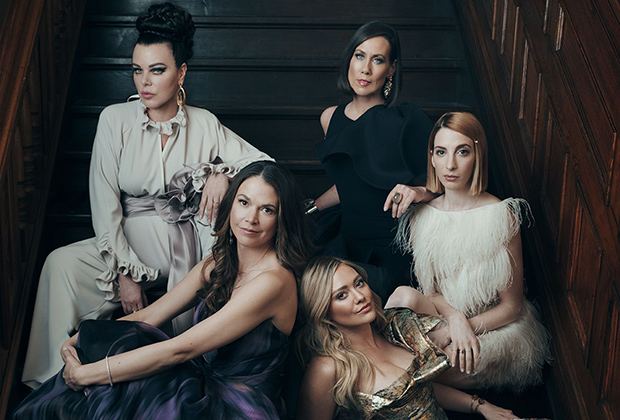 TV Land hasn’t officially announced that Younger‘s upcoming seventh season will be its last, but the writing is on the wall — or, more accurately, on Instagram.

Debi Mazar, a regular cast member since Younger premiered in 2015, shared this touching tribute to costar Hilary Duff on Thursday: “Last night I filmed my final scene with [Duff] after 7 seasons on [Younger]. I adore this woman & I’m so proud of her. Not only is she a FIERCE broad, an amazing mother, but also a generous, seasoned actress with a wicked sense of humor. Hilary was brave enough to finish out this season in NYC (she’s a Los Angeles gal) during a pandemic, and VERY pregnant!!! Congratulations on your wrap!”

That scene was filmed on the same night that series star Sutton Foster, who plays Liza Miller, posted a simple message to her own Instagram story: “Oh Liza…I’m gonna miss u.”

TVLine has reached out to TV Land for comment.

But this is hardly the first evidence of Younger‘s impending conclusion. Tessa Albertson, who has recurred as Caitlin Miller since Season 1, posted an emotional farewell to her character on Instagram in January, calling it the “end of an era.” She also manifested another opportunity to work alongside her TV mom, writing, “Our paths will cross again. This is just the beginning.”

Duff was technically the first to let the news of Younger‘s final season slip during an interview with Australia’s The Morning Show in August 2020, casually referring to Season 7 as the last season. “It has been tough because I’m supposed to be in New York right now filming [the] last season, and we have been on hold for quite a few months,” she said at the time. “I think production is feeling confident that in the next month or two we can get back to our schedule and shoot our last season.”

TVLine then spoke with series creator Darren Star, who clarified that he was “unofficially planning [Season 7] as a final season.”

That said, we might not be done with the Younger-verse just yet. It was reported in May that ViacomCBS was working with Star on developing a spinoff about Duff’s character, Kelsey Peters. It’s unclear which network or streaming platform would house the Kelsey-centric series.

Younger stars Sutton Foster as Liza, a 40-something divorcée who poses as a millennial to land a job in the cutthroat industry of New York publishing. In addition to Duff and Mazar, the series also stars Miriam Shor, Nico Tortorella, Molly Bernard, Peter Hermann and Charles Michael Davis.

The show concluded its sixth season in 2019 with a series of game-changing developments — including a long-awaited proposal. What are your hopes for (what now appears to be) Younger‘s final season? Whatever’s on your mind, drop it in a comment below.