Walking Dead Boss Previews Pivotal Daryl Episode: ‘She’s Somebody Who Obviously Left a Mark on Him’ 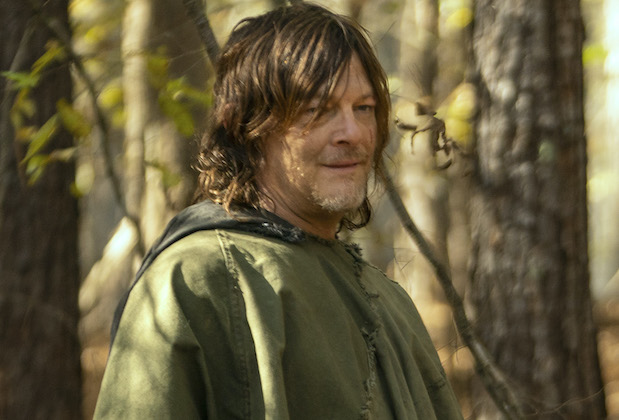 Sunday’s episode of The Walking Dead is, not to put too fine a point on it, a must-see for fans of Daryl and, for that matter, his four-legged friend, Dog. “It tells a story about what was going on with Daryl during the long stretch of time that he was away [futilely searching for his lost buddy, Rick] and how he came to have this dog,” showrunner Angela Kang tells TVLine.

It also tells a story about how Norman Reedus’ beloved alter ego came to make the acquaintance of a mystery woman named Leah, played by True Blood alum Lynn Collins. “This character comes into Daryl’s life at a time when they’re both very raw and vulnerable,” previews Kang, adding as if the teaser photo of Leah holding a gun on Daryl wasn’t a bit of a tip-off, “They have this very complex relationship that takes a long time before it starts to thaw.”

When it does finally begin to defrost, however, Leah comes to have a significant impact on our taciturn protagonist. “She is somebody who obviously left a mark on Daryl,” the executive producer hints. Ultimately, how he regards her becomes “all part of his guilt over time in the apocalypse.”

Intrigued? Having seen Sunday’s “Find Me” (9/8c, AMC), we can say with some certainty that you should be. While you’re here, check out photos from the episode in the gallery above, then hit the comments with your wish list for the remainder of Season 10’s bonus episodes.