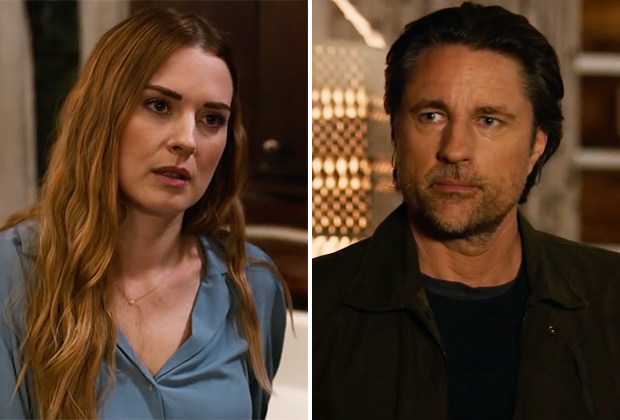 Mel and Jack’s relationship remains the hottest topic in town when Virgin River returns on Friday, Nov. 27. And no matter how hard they try, neither can be excluded from the narrative.

When asked how Jack is doing atop the Netflix drama’s sophomore season, Martin Henderson tells TVLine, “Not great.” And can you blame him? Just as the emotionally damaged Marine was learning to open his heart to someone new, he discovered that his ex-girlfriend is pregnant.

“As a character, Jack works primarily from a sense of honor and duty,” Henderson says. “Being a Marine is such an integral part of who he is, and that extends to his responsibilities as a future father and his desire to be there for Charmaine. Unfortunately, those duties are often at odds with what Mel would want, which makes for a messy, complicated triangle between the three. They’re all after certain things, and the negotiation is clumsy. Charmaine, of course, manipulates things to the best of her abilities, and then it’s up to Jack and Mel to navigate that in a way honors themselves and each other.”

Alexandra Breckenridge echoes Henderson’s concerns about Charmaine, confirming that she’s “a little crazy pants. The thing is, Charmaine’s base level is already a little bit crazy, and then she gets pregnant… by her ex-boyfriend… who she’s still in love with.” (Hot take: We sympathize!) “But these are characters who just belong together. They’re like magnets, no matter how many obstacles keep getting thrown in their way.”

But as much as Virgin River is the story of Mel and Jack’s romance, it’s also about both characters conquering their individual problems. Breckenridge acknowledges that Mel has “really worked through a lot of the grief that she experienced in the first season, and she learned to sort of open up her heart again. She’s a survivor. She’s going to get back up again and make the best of it.”

As for Jack, Henderson says we’ll get into “some of the things he’s still struggling with from Iraq, the demons he’s plagued with, and how he attempts to push all of that down. It all starts to bubble up as he feels the pressure of what he’s up against with Charmaine and the baby. And I’m glad that we see more of that aspect of him. He’s not just this romance novel hero. He’s flawed and he’s struggling.”

We’ll leave you with this tease from showrunner Sue Tenney. “You’ll see Jack and Mel struggle against their attraction in Season 2, and you’ll see what happens if they succumb to it. You’ll see what that means for their future — and how that future gets massively complicated in the very last moments of the season.”

What are your hopes and predictions for Virgin River‘s second season? Drop ’em in a comment below.