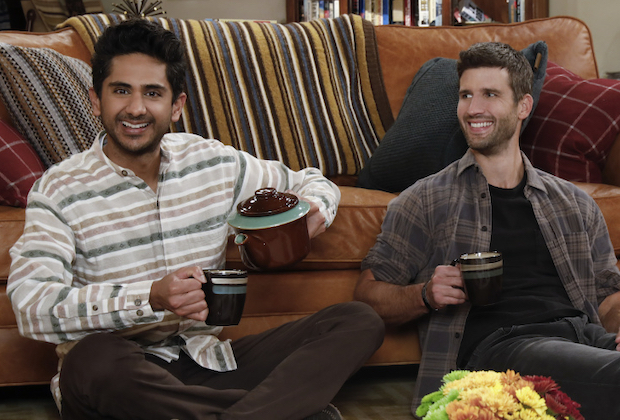 Does sitcom giant Chuck Lorre have another hit on his hands?

CBS aired the first trailer for United States of Al during Thursday’s Young Sheldon. Hailing from Big Bang Theory vets David Goetsch and Maria Ferrari, the new comedy focuses on the friendship between Riley (Enlisted‘s Parker Young), “a Marine combat veteran struggling to readjust to civilian life in Ohio,” and Awalmir aka “Al” (Rules of Engagement‘s Adhir Kalyan), “the interpreter who served with his unit in Afghanistan and has just arrived to start a new life in America,” according to the official logline.

Similar to predecessors Mom, Bob Hearts Abishola and B Positive, United States of Al looks to blend comedy and drama. Much of the trailer focused on Riley and Vanessa’s fractured relationship. Al is irked that Riley didn’t tell him about his marriage troubles, and is determined to mend their relationship.

United States of Al premieres Thursday, April 1 at 9:30/8:30c, following the conclusion of The Unicorn Season 2. As such, Lorre will seize control of CBS’ entire Thursday night sitcom block, which also includes the aforementioned Young Sheldon, B Positive and Mom (which is ending with Season 8).

Will you tune in for United States of Al? Press PLAY on the trailer below, then hit the comments with your first impressions.