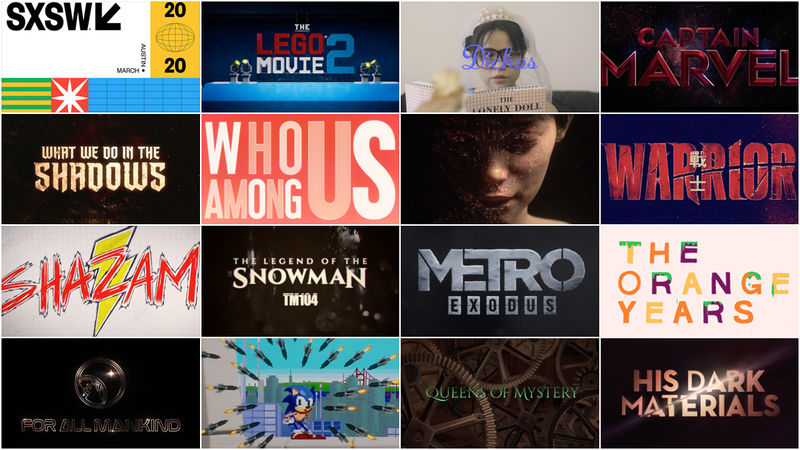 The SXSW 2020 Title Design Competition screening and judging process, set to take place on March 15th in Austin, Texas, was cancelled this year. So we’ve brought all the nominated work together here.

For title designers in the United States, there are few avenues for formal peer recognition. There is no Oscar for title sequence design. In the United Kingdom, there’s a BAFTA for Titles and Graphic Identity and in the United States, there’s a Primetime Emmy Award for Outstanding Main Title Design – but just for work in television. So other than the Emmys, which is limited to titles produced for TV, the most notable award for title design in the United States is given by SXSW. In fact, the SXSW Excellence in Main Title Design Award is medium- and genre-agnostic and this year the finalist title sequences span the fields of film, television, conferences, education, and music.

On March 6, the 2020 edition of the SXSW Conference & Festivals was called off due to coronavirus concerns. Art of the Title’s Editor-in-Chief Lola Landekic was slated to be a judge at the Title Design Competition. The annual screening, usually presented in front of a large, enthusiastic audience and succeeded by a…

"The Munsters" is one of those old-school '60s sitcoms that couch potatoes of a certain age watched and rewatched throughout their...

Hannah Gadsby just inked a massive deal with Netflix, the streaming service the Emmy award-winning "Nanette" and "Douglas" comic once...

(Superhero Bits is a collection of stories, updates, and videos about anything and everything inspired by the comics of Marvel, DC, and...

The 10 Most Unsettling Moments In Don’t Worry Darling

"Don't Worry Darling" may have failed to impress overall, but it still offers plenty to discuss, including the bonkers ending. Themes...

Part of the tragedy of "Cowboy Bebop" is how the main characters are so weighed down by their pasts that they're unable to live in the...