For months, South Park fans have wondered how the Comedy Central staple would tackle the current state of the world. After Wednesday’s pandemic special, they finally have their answer — and it’s horrifying.

Naturally, everyone in South Park takes a slightly different approach to the pandemic. Randy sees it as a business opportunity, proudly calling a summit in the town square to announce that Tegridy Farms is having a “pandemic special,” a 10 percent-off extravaganza. “People are dying, Randy, and all you can think is to make a special about it?” asks voice-of-reason Sharon. But Randy remains confident in his latest venture, and it isn’t long before he’s rubbing his success in his family’s face.

That is, until a news report confirms that scientists have pinpointed the origin of the coronavirus to a specific bat in a “seedy part” of Wuhan. The news stops Randy dead in his tracks, as he suddenly recalls having unprotected sex with a bat during his trip to Wuhan. It was during one of his all-night benders with Mickey Mouse, who reminded Randy that a bat is basically just a mouse with wings.

It’s a serious wake-up call for Randy, who previously referred to COVID-19 as “some dirty virus from China” and downplayed his brother-in-law’s diagnosis because “Jimbo’s a fat alcoholic who would be in the hospital anyway.” Randy is desperate to hide the truth from his wife because, as he points out, “If she finds out I started the pandemic, she’s going to be a total bitch about it.”

Randy is briefly relieved when follow-up tests reveal that the bat is not connected to the pandemic, but a whole new panic sets in when he learns the real creature responsible. It’s a actually a pangolin, and you guessed it — Randy suddenly remembers that he and Mickey had sex with one of those, too.

He immediately attempts to cover his tracks, infiltrating the containment lab by posing as a “pandemic specialist.” (By his logic, he’s not lying!) After setting his one-time lover free, Randy thinks he’s in the clear, until Mickey threatens to expose him to the world. Thinking quickly, Randy buys himself some time by testing a new theory: If he can get his DNA into COVID-19 patients, he could vaccinate them without them anyone learning the truth. So he does just that by depositing his specimen (ugh) into a Tegridy joint and delivering it to Jimbo. And wouldn’t you know, it works!

So Randy gets down to business, filling his massive supply of weed with his own personal seed. (Grossest rhyme ever.) But while this “special” strain of weed does briefly eliminate symptoms of COVID-19, it comes with an unexpected side effect: a Randy-style mustache! Pretty soon, every stoner in town is rocking his signature ‘stache, forcing Dr. Anthony Fauci to encourage all Americans to start wearing their “face diaper” over their mouth “where the mustache would be.” (Ironically, this is what gets everyone to start wearing their masks correctly.) 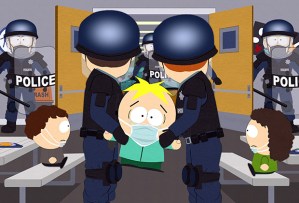 Meanwhile, the children of South Park must readjust to life back in the classroom. They’re all a little hesitant, but no one is more opposed to the return of in-person learning than Cartman, who opens the special with a full-blown musical number about the unbridled pleasures of social distancing. The portly troublemaker, who angrily concludes that “Cartman’s life doesn’t matter,” is determined to make things very uncomfortable for his classmates.

Then again, things at South Park Elementary School are already a mess, what with most of the teachers being replaced by police officers. As Detective Harris explains, they force has been defunded “due to events beyond our control” and wants to re-establish itself as a leader of the community. Cartman takes advantage of the police presence, starting a fight that leads to Token getting shot. After dismissing the shooting as a “COVID-related” injury, the cops force the entire school into lockdown.

The boys make a desperate plea to President Garrison, who only takes their call because they misrepresent themselves as Mr. Slave. (Aww!) They beg him to return to South Park and stop the pandemic, to which he asks, “Why would I do that? I made a promise to the American people to get rid of all the Mexicans.” When the boys remind POTUS that it isn’t only killing Mexicans, he replies, “Well, it’s killing a lot of them. I was doing a crap job until this pandemic happened. I’m going to actively not do anything, and you can eat s–t off my balls and die.”

Stans’ attention then turns to a downtrodden Butters; in an attempt to life his spirits, the boys book him an appointment at Build-a-Bear and help him break out out of quarantine. At this point, the townspeople have been whipped into a looting frenzy (doesn’t take much, huh?) until they’re at each other’s throats in the streets. The police claim they can’t get involved because they’ve been defunded, so the mayor signs an executive order to re-fund them. Once again, it takes only a few minutes for them to start shooting innocent children.

Just when the madness reaches its apex, Randy decides to come clean, bringing the pangolin out for everyone to see. But Cartman moves surprisingly quickly, snatching the creature and dangling it over the Build-a-Bear machine. (As if it hasn’t been through enough already!) One of Stan’s classic speeches inspires a change of heart within Cartman, so he hands the pangolin over to the scientists, ensuring a vaccine can be made.

Sadly, the pangolin — and the scientist holding it — is then burned alive by President Garrison, who pops into the frame to remind everyone, “Don’t forget to get out and vote, everybody! Big election coming up!” Yikes.

Was South Park‘s quarantine special everything you hoped it would be? Grade it below, then drop a comment with your full review.