Soulmates Sneak Peek: A Professor Gets a Pretty, Law-Breaking Surprise 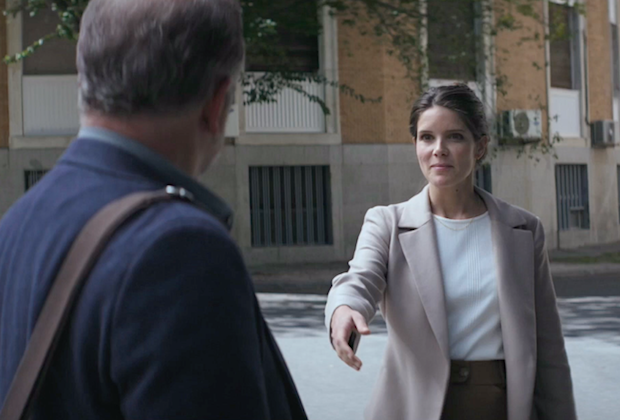 A mild-mannered college professor gets a most unexpected — and unwanted — surprise in this exclusive sneak peek from Episode 2 of AMC’s Soulmates.

The six-episode anthology series’ premiere established that in the year 2023, scientists identify in the human body the “soul particle,” which opens the door for the company Soul Connex to test and pair people with their soulmate, whomever and wherever that person might be. (Episode 1, starring Succession‘s Sarah Snook, earned an average reader grade of “B.”)

In this week’s episode, “The Lovers” (airing Monday at 10/9c), David Costabile (Billions) plays David, a tenure-seeking professor whose life is at risk of being turned upside down in the clip above, when Alison (Lodge 49‘s Sonya Cassidy) confronts him with proof that she is his soulmate.

Why is David so caught off guard by this introduction? And to what lengths did Alison go to get facetime with her soulmate (and why)? Press play above to witness the start of something… quite complicated.

Subsequent Soulmates episodes — starring the likes of Charlie Heaton (Stranger Things), Malin Akerman (Billions), Bill Skarsgård (Castle Rock), Betsy Brandt (Breaking Bad), JJ Field (TURN) and Georgina Campbell (Black Mirror) — involve an unconventional marriage that is disrupted by the arrival of a third party; the theft of a passport that derails a man’s plan to rendezvous with his soulmate; a church that helps people move on after the loss of their perfect match; and a pairing in which a woman grapples with her growing distrust of her soulmate.