Miss Audrey has been singing the blues ever since Mr. Wilford resurfaced — and this Monday’s Snowpiercer (TNT, 9/8c) will delve into the dark reasons why.

When last we tuned in, the Night Car’s manager and premiere entertainer was looking a bit wobbly, slurring through a welcome for the horde cramming into her cabaret, as Snowpiercer shut down numerous cars to power through a perilous climb. And while newly minted Detective Till wrote it off as Miss Audrey “cracking” like many a passenger, there is a specific reason for her spiral, as Tony Award-winning Broadway vet Lena Hall, who plays the enigmatic chanteuse, shares in this TVLine Q&A. 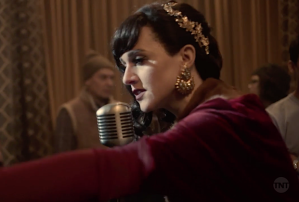 TVLINE | When they were moving everybody to the Night Car to brace for that big climb, Miss Audrey wasn’t looking too good. She seems a bit off her game. What’s going on?
You know, there’s a lot to unpack. There’s a lot going on. Everyone else is just running around trying to make things not happen, and she knows inevitably what is actually going to happen, so it’s really weighing down on her.

Not only that, she has such a past with Wilford (played by Sean Bean) that we’re going to see more of in Episode 4 and 5, and she just doesn’t know how to deal with the fact that he is there. She doesn’t know what’s going to happen when she sees him again, knowing everything that had happened.

TVLINE | It sounds like her connection with him is a bit more than knowing what his favorite whiskey is.
Correct. There’s a lot there, and she knows it’s coming. I would liken it to the people who knew that this pandemic was happening, while everyone else was running around, not really understanding how bad it’s going to get.

TVLINE | In the promo for this week, it looks like she is being asked to do something that she does not want to. She worries it will “open Pandora’s Box.”
Oh, yes. There’s a lot asked of her, and she knows her vulnerabilities. She basically can’t stop what’s inevitable, and she won’t be happy with it. 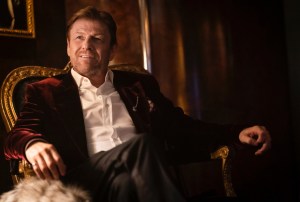 TVLINE | It feels like Wilford’s return really “flipped a switch” with Miss Audrey, because she had been cool as a cucumber until now.
Yes. She’s had her Night Car, her strength. Her purpose in life changed when they left that station, basically, and she found a new purpose, a broader horizon, a better life for herself. She’s dealt with everyone else’s problems and never her own. She has no one to go to. So, essentially she has never dealt with her own demons and her own s–t, and she’s now suddenly faced with it head on.

TVLINE | Give us a taste of what it’s like when Miss Audrey and Wilford lock eyes on each other again for the first time.
It’s like explosive fire. I would liken it to two people who bring out the absolute worst in each other. 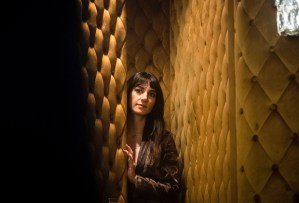 TVLINE | Meanwhile, Zarah (Sheila Vand) is leaning towards a dark turn herself, with Josie still alive. Is that anything that Miss Audrey will get a sense of? They seemed to be buddies in Season 1.
Well,  Zarah worked in the Night Car and she was very close with her workers. Miss Audrey taught Zarah everything that she knows, and there’s kind of a “therapist/patient” thing going on between them and at this point. But Audrey doesn’t have any bandwidth for that anymore. In Episode 2, she snapped at Zarah because she just can’t wrap her head around her problems. It’s like, “Zarah, you have bigger fish to fry than that. Just stay safe.” And again, it’s because Miss Audrey knows what’s coming around the bend, and knows it’s going to be horrible for everyone.

TVLINE | I heard we’re going to get a special song from you in Episode 5. What can you say about it?
Yes. I was lucky enough that the team really embraced my music and other sides of me as well. They’ve been doing their research and allowing me to kind of infuse Miss Audrey with a lot more of like the things that I grew up doing, and I think that’s pretty cool. So, for Episode 5 they basically used my voice to tell a story. Previously they licensed a bunch of covers from me, but here they asked for some original music. I had been working on an original album ages ago that stalled out, but I had a bunch of demos and they picked one that they loved, and it reignited that project. But they asked for me to record it in French….

TVLINE | And what language did Lena Hall take in high school?
Spanish, and failed horribly. [Laughs] But I did a lot of research to make sure that it was close to being how a native French speaker would sing. My father speaks fluent French, so I had him translate the lyrics, and then I found a French singer to help me translate that into a song because it is very different when you have to sing something phonetically. I recorded the song, and I am releasing it on [February] 15th, and it’ll be in the show the following week.

I love that they asked me for an original, because it did spark this album again, and I am so grateful for that because for the longest time I was just doing covers. I had a rock band, called The Deafening, and we did all original music, but it was like classic rock-sounding. I had been working on this [solo] album with the guitarist of that, but then the band disbanded because everybody moved to different parts of the country. But now these beautiful songs that never got to see the light of day are coming back, and they’re more relevant than ever. 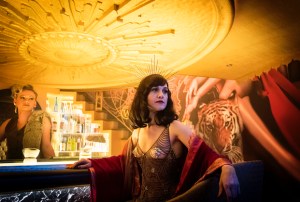 TVLINE | Lastly, I feel like we have almost exclusively seen Miss Audrey in the Night Car. Are we going to see her in any other locations this season? Maybe interacting with other characters, besides Wilford, for the first time?
Certainly.  She is much more around. And one of the best things about Miss Audrey that she magically comes up with the most amazing outfits….

TVLINE | It’s funny, I wondered during Season 1, like, who packed all these fancy fabrics? There was a dancer once in the Night Car who had on, like, a bird costume or something. If I’m boarding a train for the apocalypse, I am grabbing all sweat pants and jeans.
[Laughs] Well, [Snowpiercer] was supposed to be a luxury liner. And the Night Car was originally supposed to be a very debaucherous car, a place where everyone did drugs and drank. And Miss Audrey sang and entertained, but also kind of was a concubine, running her harem of women and men, and those who have yet to make up their minds. We joke that Miss Audrey has an entire train car that is just her wardrobe!

Want scoop on Snowpiercer, or for any other show? Email InsideLine@tvline.com and your question may be answered via Matt’s Inside Line.