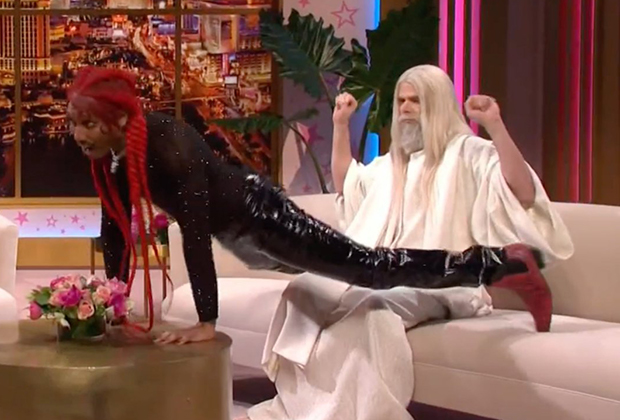 It was all part of Oops, You Did It Again, a recurring sketch in which Spears (played to perfection by Chloe Fineman) shines a light on the week’s biggest pariahs. She also called out Selling Sunset‘s Chrishell Stause — though not by name — for claiming that Spears doesn’t write her own social media posts, before thanking this week’s sponsor: Georgia, “voted best place… not to vote.”

Lil Nas X (played by Redd) was the first guest in the hot seat, as Spears grilled him about giving the Devil a lap dance in his new music video, as well as releasing a controversial line of Satan shoes. “I don’t know why Nike is so mad,” the rapper said. “Their slogan is ‘Just do it.’ Well, I did it!”

Spears, naturally, determined that the only way to even things out was for the rapper to give God a lap dance — which he did, though he reminded the audience that it was actually his friend Gary (played by Mikey Day) dressed up like God. You know, just in case you were confused. (Meanwhile, the real Lil Nas X tweeted, “snl going to hell.”)

please welcome @LilNasX to Oops, You Did It Again pic.twitter.com/Ogz74KYlbK

The second guest was Kate McKinnon as Pépe Le Pew, who proved that he’s a changed skunk by greeting Spears with a handshake, rather than the usual unwanted kiss. After insisting that he has no hard feelings about being taken out of the new Space Jam movie, the cancelled Looney Tune insisted, “I’m an actor. The part you see me play on TV and in the movies, that is not me.” Fair enough.

Then came the true guest of dishonor: Davidson as Gaetz (with a strong dash of Quagmire from Family Guy). The hostess ran through all of the recent sexual misconduct allegations brought against Gaetz — including that he allegedly dated a 17-year-old girl who he took across state lines, and that he allegedly showed his Republican co-workers inappropriate pictures of the women that he slept with — before telling him, “I think I can smell a predator when I see one. After all, I was on The Mickey Mouse Club.”

Saturday’s episode welcomed actor Daniel Kaluuya (Get Out, Judas and the Black Messiah) as a first-time host, while St. Vincent returned to Studio 8H as a musical guest for the second time; she first appeared on SNL for the Andy Samberg-hosted Season 39 finale in 2014. Pepe sprays him.

Next week’s Saturday Night Live will be hosted by actress Carey Mulligan (Promising Young Woman), with Kid Cudi serving as the show’s musical guest. That episode will mark both Mulligan and Cudi’s SNL debut.