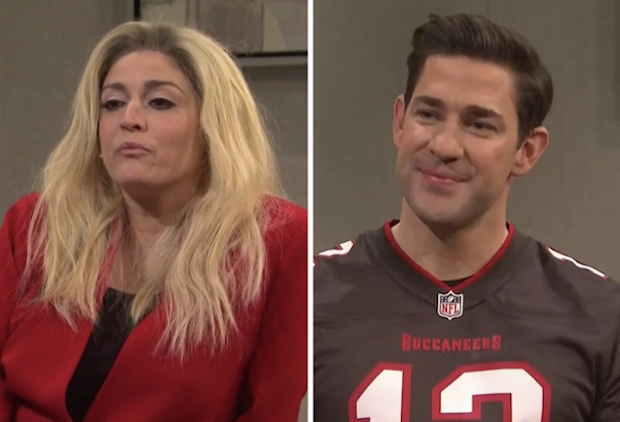 Is America broken beyond repair? That was the question on Kate McKinnon’s mind in Saturday Night Live‘s first sketch of 2021.

“Hello and welcome to What Still Works, where we look at every part of society and wonder ‘What still works?’ It’s a new year and we have a new president, so some things should work — but do they?” McKinnon asked.

The first topic was government — and already, McKinnon had her doubts. For insight, she brought out Marjorie Taylor Greene, the wackadoo congresswoman from Georgia who’s been promoting QAnon conspiracy theories. The U.S. representative sat down and offered McKinnon a gun, then ran through a series of grotesque conspiracies regarding the Parkland school shooting, the September 11 attacks and California wildfires.

And now, it’s time for “What Still Works?” pic.twitter.com/4yxkD2Tma8

Next up, McKinnon checked in on the stock market with the new majority shareholder of GameStop, Derrick Boner. ‘Nuff said.

Afterwards, social media CEOs Jack Dorsey and Mark Zuckerberg dropped by to discuss how Twitter and Facebook have played a hand in spreading misinformation. “Fundamentally, Facebook still works,” Zuckerberg argued. “Not only does it help form communities online, it has helped people meet and connect in real life. For example, at the Capitol!”

After Zuckerberg short-circuited, McKinnon checked in on the coronavirus vaccine rollout with O.J. Simpson, who is among the three percent of the population who have already received the vaccine while teachers and those suffering from longterm lung conditions remain on the waitlist.

For her final topic, McKinnon asked, “Is Tom Brady working?” There with his thoughts was the Tampa Bay Buccaneers’ star quarterback (played by this weekend’s SNL host, John Krasinski), who acknowledged that no one’s rooting for him heading into Super Bowl LV. Once he bolted, McKinnon acknowledged the absurdity of the cold open.

“I’ve been Kate McKinnon, as myself, slowly losing my mind like all of you,” she said. “Stay strong — or weak. Weak is a great option, too.”

Derrick Boner stopped by “What Still Works?” to talk stonks. Oh, and Jack Dorsey and Mark Zuckerberg stopped by, too. pic.twitter.com/eTY1vVd4IB

What did you think of SNL‘s first cold open of the year? Were you surprised it didn’t center on newly minted president Joe Biden or VP Kamala Harris? Hit the comments with your reactions, and weigh in on the whole episode via the following poll.