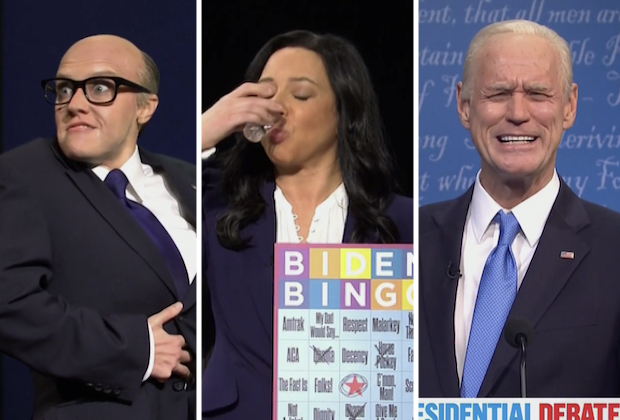 The comedy all stars faced off in SNL‘s parody of the second and final presidential debate, during which Trump assured the American people that he’d have a coronavirus vaccine in a matter of weeks. (“If I get reelected, everyone in America will be on a big, beautiful ventilator,” he boasted.)

Biden, on the other hand, struggled with anger management. He eventually launched into full Clint Eastwood mode, then defended himself against myriad attacks by the incumbent.

“First I’m creepy, then I’m sleepy,” he said. “You say I have dementia, then you say I’m a criminal mastermind.” He also defended himself against baseless accusations that he’s made millions through corrupt business dealings with China, adding, “I live in Delaware, [where] a night out is $ 28… I bought this suit on a train, c’mon!”

The debate also featured an appearance by Trump’s personal lawyer Rudy Giuliani (played by Kate McKinnon), who made headlines this week for a compromising scene in the new Borat film. Once again, America’s mayor looked to be fondling himself.

“It’s not what it looks like!” Giuliani said. “My microphone was stuck… on my balls.”

At the end of the sketch, Rudolph joined Baldwin and Carrey on stage to mark the final debate sketch of the election cycle. “Good luck, America!” she exclaimed.

What did you think of SNL‘s take on Debate No. 2? And of the four cold opens Carrey’s Biden has appeared, which was your favorite? Drop your thoughts in a comment below.