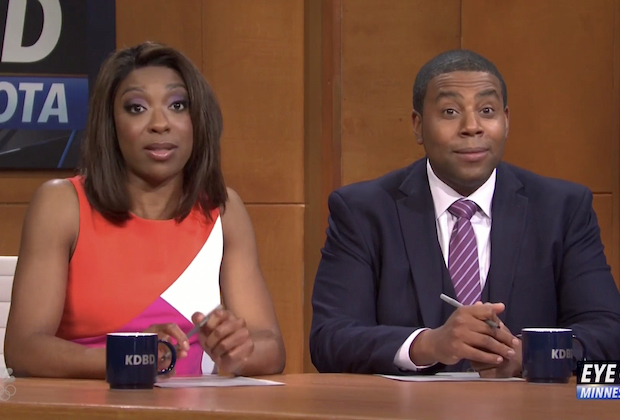 Saturday Night Live weighed in on the Derek Chauvin trial this weekend by way of a fictitious morning news program out of Minnesota.

In the cold open, a four-person anchor team — Ego Nwodim, Kenan Thompson, Kate McKinnon and Alex Moffat — discussed what had transpired so far in the trial of the former Minneapolis cop charged in the death of George Floyd. While they were all in agreement that “the video footage alone should tell you everything you need to know about what happened,” the white anchors had far more confidence in the American justice system than their Black counterparts.

“The defense trying to make a case that George Floyd’s drug use was somehow responsible is just deplorable,” Nwodim said. Added Thompson, “It was a clear act of desperation to create doubt where there is none.”

“Exactly,” McKinnon responded. “And there’s no way the jury’s going to fall for that.” But Nwodim and Thompson’s characters weren’t convinced.

The anchors eventually took a step back from their tense discussion to reflect on the “obvious stuff,” including a “glaring discrepancy” in the way Black people are treated by police and the need for “concrete solutions.” When Nwodim’s character suggested reparations as a potential fix, Moffat’s alter ego cut her off in disagreement.

The news personalities eventually moved on to other headlines, including the death of Prince Philip. When McKinnon’s character mentioned that the world lost “royalty” Friday, Nwodim and Thompson chimed in to acknowledge the passing of “Party Up” rapper DMX.

“I was talking about the prince,” McKinnon said.

Press PLAY on the video below to watch the sketch in full, then drop a comment with your full review.