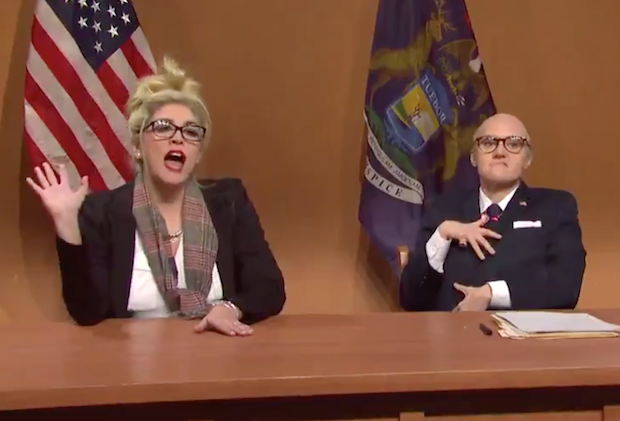 Following a four-week break — and with its second episode since Election Night — Saturday Night Live returned with a cold open that spoofed (as much as one is able to) the witnesses that President Trump’s Rudy Giuliani-led legal team has trotted out to argue voting fraud.

In C-SPAN coverage of the Michigan State Senate hearing testimony alleging fraud in the November election, Mikey Day and Ego Nwodim played House Oversight Committee members who grew increasingly exasperated as Giuliani, in between passings of gas, cycled through “a dozen highly intelligent, barely intoxicated individuals who are all eyewitnesses” to voter fraud.

First up was Cecily Strong — in a slight variation on “The Girl You Wish You Hadn’t Started a Conversation With at a Party” — as Melissa Carone, who avowed she “personally saw hundreds if not thousands of dead people vote.”

Heidi Gardner then came on as a woman who claimed she “ate ballots” after being tricked by Democrats who set up food trucks filled with ballot burgers, ballot pizzas and such. Next up was the My Pillow Guy aka Mike Lindell (played by Beck Bennett), who shamelessly shilled, “A ‘Demorat’ can hide over a million fake ballots in a My Pillow and still get a great night’s sleep!”

Carone returned for a bit, to sip a COVID vaccine martini and confuse Dominion (as in the voting technology company she worked for) with Domino’s, after which Alex Moffat played a man who claimed that he saw aliens fill out absentee ballots, for Biden… seven years ago.

The kicker to the skit, if there was one, was tooty Rudy’s introduction of “Nicole Kidman’s character from The Undoing” (played by Chloe Fineman), who had nothing to offer on election fraud but instead insisted — in her “Upper East Side of Australia” accent — that husband Hugh Grant was innocent because he’s “too hot and white.”

The defense calls Nicole Kidman’s character from The Undoing. pic.twitter.com/IPYSfQcci3

The committee finally interrupted Giuliani from… er, tucking in his shirt… to insist he wrap things up, at which point the former New York mayor said he would not stop fighting until the presidential election was overturned — or he was given “a full pardon and $ 10 million in cash.” He then announced his next presser would be held at the Ritz-Carlton… Plumbing & Heating Supply Company.

Additional video clips of the cold open will be added once available. In the meantime, share your reactions in Comments below.