Richard Schiff: West Wing Special Is Poignant Look at ‘The Beauty of Voting’ — Plus, Why Leo Casting Is ‘Brilliant’

Premiering Thursday, Oct. 15, A West Wing Special to Benefit When We All Vote marks the first time in 17 years that the original cast of the Emmy- and Peabody Award–winning drama has come together — accompanied by series creator Aaron Sorkin and executive producer/director Thomas Schlamme, for a theatrical stage presentation of the “Hartsfield’s Landing” episode from Season 3.

Among the chosen episode’s plotlines, Deputy Chief of Staff Josh Lyman anxiously awaits the 42 votes cast by the titular town in a portentous New Hampshire presidential primary. “It’s about democracy, it’s about the beauty of voting, it’s about living up to your potential and living up to your brilliance,” Richard Schiff, who returns as White House Communications Director Toby Ziegler, tells TVLine. “That’s why it was so special to do this particular episode.”

TVLine spoke with Schiff about the special’s “poignant” timeliness, what about the staging gave him goosebumps, and more.

TVLINE | I don’t think I realized how excited I was for this special until the trailer came out, and I got so emotional watching just those 90 seconds. When’s the last time that anywhere close to this many of you were together in one space?
This many of us? It’s been a while. We’ve been together maybe with this many of us but with different groupings, like Joshua Malina (who played Will  Bailey) instead of Rob [Lowe]. When we were campaigning in ’16 in Ohio, Wisconsin, Michigan and Pennsylvania, that was a pretty big group with Mary McCormack (who played Kate Harper), and Josh, and Allison, and Brad, and Dule. Other than that, it might have been a party at Allison’s house. And I think Brad had a dinner at his house about five or six years ago, and that was the last time we were all together sitting down.

TVLINE | Is a stage reenactment like this something you would be game for anyway, or did the “Get Out the Vote” cause make it a must do?
Well, it seems like anytime that they ask The West Wing to come together for some reason or another, it’s for political reasons, so it’s not a surprise that this is to help to get out to vote, that that’s our cause. But just to get back together for the sake of getting back together, other casts get to do that and reap millions of dollars from it, but we of course have to do it pro bono because we’re good people. [Laughs]  But that’s what makes it so special, literally special, because there’s a purpose behind it, and it always feels better to do this kind of work for a reason. Otherwise, it’s just kind of self-congratulatory or, you know…

TVLINE | A cash grab?
A cash grab, exactly — which I don’t have a major objection to in principle! [Chuckles] But that doesn’t seem to be who we are. 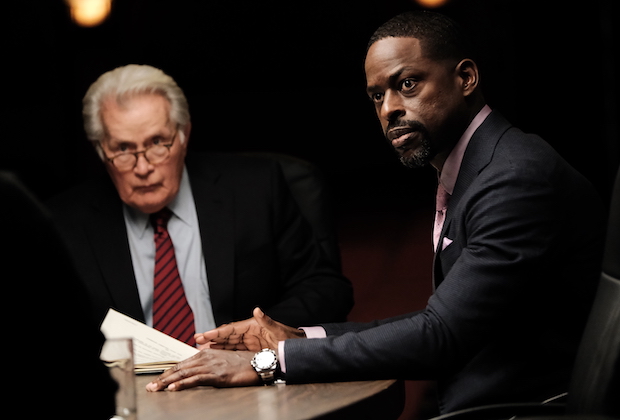 TVLINE | There is one new face in the mix, and while Sterling K. Brown is a fine, fine, Emmy-winning actor, he’s almost a decade younger than John Spencer ever was in the role. Might that change a bit how we perceive Leo in this?
No, because it’s really about gravity. It’s really about the ability to understand, to have the knowledge and the gravity to appreciate each other in the world, and Sterling Brown has that hyperintelligence and gravity that John Spencer had. It’s actually a brilliant choice.

always go back to my acting class in college, when a 20-year-old girl played the mother of another 20-year-old girl, and we were so engrossed in the scene. The master teacher, Earle Gister, who was my mentor, said, “You see, when you believe it, they believe it.” And there was no question that we believed that Kim, who played the mother, was the mother of Otta, who played the daughter, because they believed it. So age never even crossed my mind when Sterling was on set, no.

TVLINE | I’m always fascinated when an actor goes to reprise a role that they haven’t played for like 15, 20 years. Was there something you had to remind yourself about Toby to really lock back onto the character?
You know, Aaron [Sorkin] was so good at capturing or utilizing elements of who we were as people that eventually it filtered into the role, into the character, so Toby was very much made up of Aaron’s mind but my soul and my body, and it’s hard to separate that after doing it for seven years. In fact, when I go off on political stuff — which I would, of course, not be invited to do if I didn’t play the part — it’s very hard for me to create my own persona as opposed to going there as Toby. Of course, that’s what they would rather see — they would rather see Toby give a speech than Richard give a speech — but it’s easy for me to capture his passion, and his depth, and complexity.

TVLINE | One thing I remember fondly about Toby is he could cut you off at the knees and make you feel like the dumbest person in the room with a casual, muttered aside.
Yes, but that comes from, I think, a real disappointment with humanity while maintaining a hope that somehow we can elevate ourselves to reach our potential. I think that’s what the dichotomy was within him, because his desire to cut people down is minimal. It’s something he could do in his sleep, and it’s not the point. The point is, “Why aren’t people on board with what will make this world a better place?” And when people were not on board is when he became a bit more cutting than he otherwise would be, considering this world is not abiding by Toby’s plan.

In those days, think about what [President George W.] Bush was doing to this country with the Invasion of Iraq, and how different we would be had [Al] Gore been allowed to accept his victory in 2000. Think about where we would be with alternative energy, all these things…. Now when you think about that, it’s mind-boggling. It’s mind-boggling that there’s an existential threat to the very existence of this democracy and that someone is succeeding, with a whole lot of help I’m sure, in stealing this country from us. That’s what makes this particular episode [‘Hartsfield’s Landing”] so much more poignant, because it’s about democracy, it’s about the beauty of voting, it’s about living up to your potential and living up to your brilliance, and to not be afraid of that. That’s another reason why it was so special to do this particular episode. 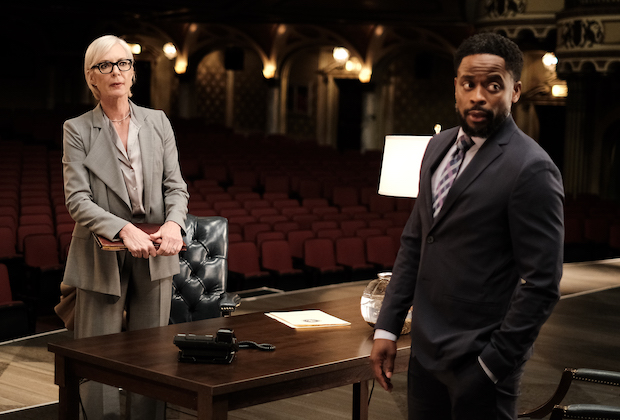 TVLINE | Was there a moment on stage when seeing somebody make a gesture or hearing the timbre of a co-star’s voice gave you goosebumps and sent you back 18 years?
I wouldn’t frame it like that, but yeah. I mean, just being across from Martin again, because all of my stuff was with him and a bit with Dulé. Martin has a very particular rhythm with Bartlet, but it was a combination of things. It was Dulé on the set at one point. And then when we’re rehearsing, there’s Aaron pacing back and forth as if he had just written it last week, and Tommy Schlamme with his intense energy. Tommy has the utmost respect for what actors have to do, so despite his hurried disposition to everything, he always yields to what the actor might need for that moment. So that whole dynamic, that perfect storm of ingredients that made up our soup 20 years ago — that’s a mixed metaphor, but you know what I’m saying — was alive again.

TVLINE | It was swirling around inside that theater.
And that was awesome. That was goosebumps right there.