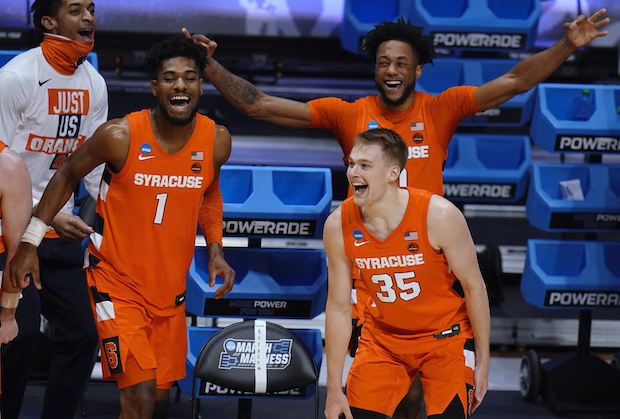 In the latest TV ratings, CBS’ primetime coverage of the NCAA men’s basketball tournament opening day — including No. 11-seeded Syracuse’s besting of No. 6 San Diego State — averaged 3.4 million total viewers and a 0.8 demo rating, a far cry from what the comparable night drew two years and one pandemic-related cancellation ago (4.9 mil/1.5) but still good enough to lead Friday in both measures.

Elsewhere, with ABC’s Shark Tank and NBC’s The Blacklist in rerun mode:

FOX | Friday Night SmackDown slipped to 1.9 million viewers — the WWE program’s second-smallest audience since at least July 31 (if not longer) — and a 0.5 rating, matching its lowest demo number of 20210.

The Live+Same Day numbers reported in our ratings column do not reflect a show’s overall performance, given the increased use of delayed playback via DVR and streaming platforms, plus out-of-home viewing. These numbers (Nielsen fast nationals, unless denoted as finals) instead aim to simply illustrate trends or superlatives. Go, Orange!