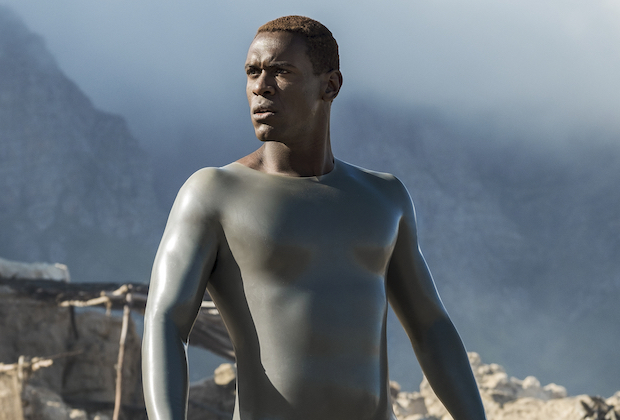 This week on Raised by Wolves, Father is offered the chance to become wiser to Mother’s manipulations. Meanwhile, one of the abducted ark kids uncovers the possibility of salvation.

In the HBO Max series’ sixth episode, titled “Lost Paradise” and premiering this Thursday, Mother (Amanda Collin) — after rekindling her connection to her creator — finds herself distracted by intense feelings she didn’t know she was capable of having. All the while, she remains unaware that Marcus (Travis Fimmel), Sue (Niamh Algar) and the Mithraic are closing in on the settlement.

But in the exclusive sneak peek above, Hunter (played by Ethan Hazzard) has just eavesdropped on a conversation between Mother and Father (Abubakar Salim), in which the former clearly lied to her partner about her morning “scouting” missions. Hunter points this out to Father, who is of course largely oblivious. Maybe Father will take Hunter up on his offer of an upgrade, to better process Mother’s lies and misdirects? Press play above to see if Father reconsiders the opportunity.

Also in the clip above, Hunter spies a most unexpected object — one that might give the Mithraic children hope for a rescue.

Want more scoop on Raised by Wolves, or for any other show? Email InsideLine@tvline.com and your question may be answered via Matt’s Inside Line.