Tuesday’s Season 5 premiere of Queen Sugar perfectly captured that “calm before the storm” vibe in the early months of 2020 before the COVID pandemic turned the world as we knew it upside down.

It was just a year ago when large groups of people were congregating in close proximity in homes and restaurants without masks and social distancing guidelines. On one hand, it made sense that the installment, titled “Late-February 2020,” would show these scenes. As the OWN drama’s creator and EP, Ava DuVernay, recently revealed to TVLine, the first batch of Season 5 episodes were shot before the pandemic shuttered production and the industry as a whole in late March.

But take away the calendar and the aesthetics and few things capture the undaunted hope that many people felt while making plans for 2020 than the sweet and understated way Ralph Angel (Kofi Siriboe) asked Darla (Bianca Lawson) to marry him during the premiere. It was just the two of them taking a walk in a park before Ralph Angel stopped, dropped down on one knee and pulled out an amethyst solitaire so he could finally and officially make Darla his wife. 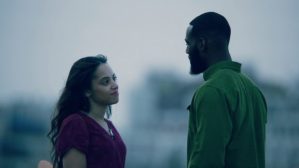 “That was special,” Siriboe tells TVLine, fondly recalling the scene being shot around his March 2 birthday. “I felt like it was a long time coming. You know where we started with Darla and Ralph Angel. They’ve been through so much and now it’s like then what? What’s next?”

As Queen Sugar fans know, that “so much” includes the couple getting engaged and planning a wedding in Season 2 only to break up because of Darla’s dishonesty over Blue’s (Ethan Hutchison) paternity. There were addiction struggles and relapses and even new love interests but, in the end, Ralph Angel and Darla kept coming back to each other like a homing device.

“The first time was a pump fake,” Siriboe says of the couple’s previous marriage plans. “That was supposed to happen. We were doing that. But, now we’re back to it in a more stable and clear way. I’m excited to see their journey play out.”

It’s a journey that will also have Ralph Angel, Darla and Blue quarantining in their house away from everyone in upcoming episodes because of COVID — something the actors had to do while filming in real life — and the parents talking to their son about George Floyd’s murder at the hands of the police. Darla and Ralph Angel will cry as they tell Blue he will be stopped by the police someday but they will tell him for his own safety nevertheless.

“It was all so fresh from this summer and coming to terms with the reality of the world we live in,” says Siriboe, who used the hiatus to launch his lifestyle and media brand, We’re Not Kids Anymore. “It’s so easy to get caught up in the myth of what we want it to be and then there’s the reality of what it is based off of history and actions, and coming to terms with that. We don’t have a lot of spaces to transmute that energy as Black people and thank God for a scene like that on a show like this.

“We’re actually tackling real things,” Siriboe adds. “As an actor, it was a blessing to transmute the pain I was feeling during that pandemic, during all of this craziness happening out here, it felt like, ‘Thank God I have somewhere to put this.’ And to watch Ethan receive it and also tap into this because he’s still a kid. To see him ask questions and interact with his dad — because his father had to prep him for our on-camera conversation — meant a lot. There’s layers. But that’s the nature of our show and it’s a blessing that we were able to tackle it.”