New Batwoman Will Battle [Spoiler] in Season 2 Premiere, While Kate Is MIA 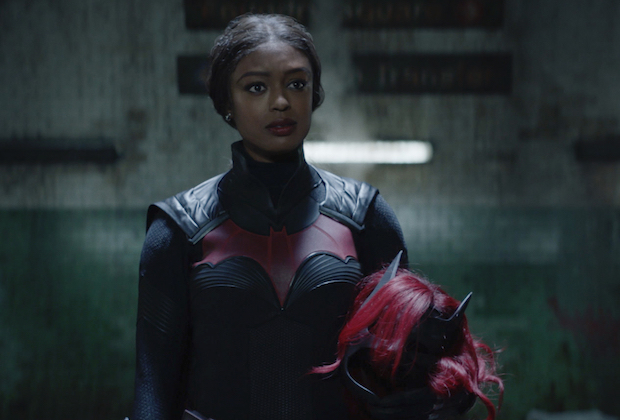 A “clash of the impostors” is on tap when Season 2 of the rejiggered Batwoman arrives on The CW.

As well reported over the past eight months, Ruby Rose and the Arrowverse series parted ways at the close of Season 1, so Javicia Leslie (God Friended Me) will now headline things as Ryan Wilder, a young woman who will come to claim the Batmantle.

The CW has now released a full synopsis for the Season 2 premiere, airing Sunday, Jan. 17 and titled “What Happened to Kate Kane?” It reads:

As friends and family hold on to hope that Kate may still be found, a homeless 25-year-old named Ryan Wilder stumbles upon Kate’s Batsuit. Focused on no longer being a victim, Ryan takes the suit to use as armor and goes rogue in the streets of Gotham, taking out various members of a new gang called the False Face Society.

Meanwhile, both Jacob Kane  and Luke Fox launch searches for Kate, Mary Hamilton  grapples with losing yet another family member, Sophie Moore struggles with things left unsaid to her first love, and Alice is furious that someone got to Kate before she could exact her revenge.

As Alice should be! Oh, sorry. Wait, there’s more:

At the same time, “Bruce Wayne” (played by guest star Warren Christie) returns under the pretense of searching for Kate, but the truth is he wants his suit back and it becomes the clash of imposters as “Batwoman” and “Bruce” square off in the action-packed season premiere.

Are you still curious to witness this change-up in Batwomen? And can anyone in a million years guess what song “Bruce Wayne” sings to himself during his skirmish with Ryan?

Want scoop on Batwoman, or for any other show? Email InsideLine@tvline.com and your question may be answered via Matt’s Inside Line.