With the threat of Dark Josie finally behind them, the students of the Salvatore School attempted to piece together their fractured community on Thursday with some good ol’ fashioned physical fitness. (Seriously, why did Alaric think that a field day would solve anything? These kids were better off when fake Professor Vardemus was in charge.)

As predicted, the field day was a complete disaster — like, almost apocalyptically bad — though not for the reasons we all assumed. You see, Chad accidentally summoned a new Malivore monster named Nimue (aka the Lady of the Lake), followed by a skull-crushing baddie called the “Green Knight,” both of whom sought the fabled sword Excalibur. Nimue explained that only a “worthy” warrior could wield the blade against the Green Knight, but she conveniently forgot to clarify that “worthy” meant being born of a royal blood line.

After multiple failed attempts to remove the sword from the stone — including a cathartic two-person effort, courtesy of the Saltzman twins — Rafael showed up, yanked the legendary metal from its stone sheath, and plunged Excalibur into the Green Knight’s gross head. Apocalypse averted!

Meanwhile, the Necromancer spent the hour attempting to force Landon’s soul back into his physical body, which was the only way he could receive all the tasty black magic he so desperately craves. (Question for the group: If you didn’t rewatch the Season 2 finale, were you struggling to follow some of these rules?) Landon eventually did reclaim his body, but only to wake Hope up with a kiss; she surmised that her body must have sensed Landon was “dead,” so it just let her keep sleeping. (While we’re glad to see Hope conscious again, that resolution felt a little… convenient. Like when Bonnie suddenly broke Elena’s sleeping curse in the Vampire Diaries series finale without breaking a sweat, making us wonder why she didn’t just do it sooner.)

Then… one last twist! Chad and Alyssa, who formally joined “Team Monster” after Lizzie publicly shamed her for murdering her own parents (rude!), were taking a stroll in the woods, when Chad suddenly vomited black goo and died. Desperate to avoid meeting that same fate, Alyssa pledged her allegiance to the Necromancer, formally becoming his “eternal acolyte.”

Below, executive producer Brett Matthews answers a few of TVLine’s burning questions about the Season 3 premiere, including whether we might finally see Caroline back at the Salvatore School:

TVLINE | Rafael being of royal descent was a twist I didn’t see coming. Is this the beginning of a new journey for him?
This episode was really about the Super Squad banding together in Hope’s absence, so that moment for Raf was obviously a very big one. Raf’s journey through the first couple of seasons has always been about family. As a foster child, he’s always wondered where he comes from, and finding out that he’s connected to a royal blood line is an unexpected answer to that question. So he’s finally beginning to discover all of the things he’s always wanted to know about himself, including his family origins. He really felt like the perfect person to come in and save the day.

TVLINE | This is the second season that started with Hope out of commission and everyone having to pick up the slack. Was that intentional?
[Laughs] Well, the first couple episodes of this season were meant to go at the end of Season 2, so there was going to be a recurring theme there. You can kind of see where we intended to end the second season. We’ve gone back in and reworked some of those episodes a little bit. It was a unique experience that we all hope we never have to do again. I was just finishing the script for Episode 20 when we pulled the plug. You’ll definitely see the bones of where Season 2 would have ended; we think of the first four episodes as the “first chapter” of Season 3. 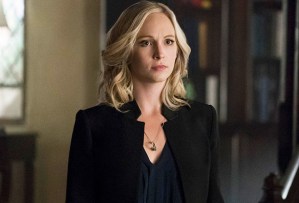 TVLINE | Josie wants to spend some time with Caroline, I have to ask the question I ask every season: Any chance we’ll see Candice King?
Our answer is still the same, and you’re probably sick of hearing it, but the door is always open to Candice. We love her and think so highly of her, and we love Caroline Forbes so much. We would be thrilled [to have her back], but it’s really up to her. We’d love to have the challenge of figuring out how Caroline fits into Legacies, be that for an episode or an arc or whatever. But it obviously depends on her schedule and the opportunities she’s pursuing in her career. While Legacies is very much a show that’s doing its own thing, it’s built upon the legacies of the other shows — hence the title being what it is — so we’d love that.

TVLINE | Now for the question on everyone’s mind: Is Chad really gone? Death tends to be pretty fluid in this universe.
Death is pretty fluid, but at the same time, it did feel like a tragic end to Chad. He’s a small character, but he definitely grew on us. I don’t know if we’ll ever see Chad again, but he’s pretty definitely dead at the end of this episode. His impact on the Necromancer will be felt moving forward. He will live on in other ways.

Your thoughts on Legacies‘ third season premiere? What were some of your favorite moments that we didn’t discuss above? Grade the episode below, then drop a comment with your full review.