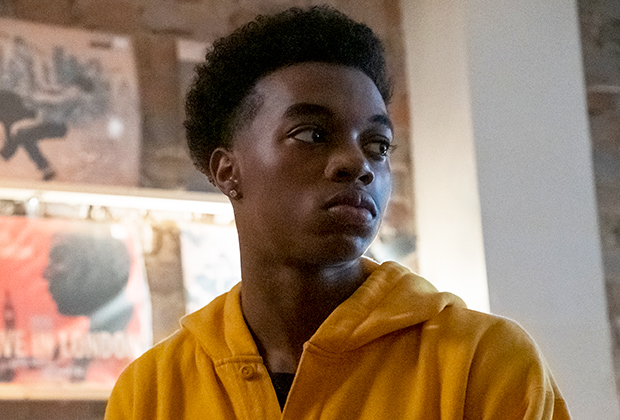 Warning: This interview contains mild spoilers from the premiere of Netflix’s Grand Army.

Netflix’s newest teen addiction is no Riverdale — and that’s a very good thing.

Loosely based on a 2013 play by series creator Katie Cappiello, Grand Army follows five diverse students at a public high school in Brooklyn. The series, which dropped its first nine episodes on Friday, offers an unflinching look at the experiences of Gen Zers in America, including some challenges that more commonly face teens of color.

“Katie is really big on making it as authentic as possible,” Maliq Johnson, who plays sophomore musician Jayson Jackson, tells TVLine. “If there was a scenario where we felt like things would have gone differently for us in our own lives, she was very open to letting us tell her that. And if there was a way she could do it, she would put it in the show.”

Compared to some of his fellow classmates — who immediately find themselves tackling issues surrounding sexual identity, poverty and slut-shaming — Jay’s life feels comfortably undramatic from the outset. “He’s a goofball and he can be mischievous, but he doesn’t do anything with bad intentions,” Johnson says. “He’s a good kid.”

Unfortunately, like so many young Black men, Jay’s spirit is tested by a series of tragic circumstances. “Jay isn’t really aware of his responsibilities, and how different it is for him as a Black man in America… until something happens on the show that forces him to pay attention to his Blackness,” he teases.

And this is just one example of the all-too-real problems tackled in Grand Army, whose first episode kicks off with a school-wide lockdown prompted by an incident of domestic terrorism nearby.

Did you check out the premiere of Grand Army? Cast your vote in our polls below, then drop a comment with your review.

Speaking about their career prospects at the start of the year, Anna-Jane admitted there was plenty in the pipeline but now it’s all been...

This Is Us Premiere: EP Promises Answers About That Huge Randall-Related Reveal Will Come ‘Quickly’

Warning: This post contains major spoilers from This Is Us‘ Season 5 premiere.  This Is Us isn’t content to rest on its Laurel any...

ITV's Lorraine has long been a pinnacle of daytime TV, with the Queen of daytime herself fronting it. But it appears Lorraine Kelly may...

Singer/actress Demi Lovato has added hosting the 2020 E! People’s Choice Awards to her calendar. Lovato will take the reins of the...

CBS’ NCIS, Blue Bloods and Others Get Shorter Seasons Amid COVID Delays

More than a half dozen CBS series are set to produce shorter seasons, as the result of COVID-related delays, safety measures and other...