If you listen closely to Robyn McCall’s teenage daughter Delilah on CBS’ The Equalizer (Sundays, 8/7c), she might sound familiar.

That’s because, up until last year, Laya DeLeon Hayes, the young actress who plays Delilah voiced the title character on Disney Junior’s Doc McStuffins. Now she’s using that same sweet voice to give her mom Robyn (played by Queen Latifah) all the snark and back chat she can handle and then some.

Thankfully, there is more to Delilah than sass. And when the revamped procedural airs on Easter Sunday, fans will find out what the teenager has been doing when she volunteers at the local juvenile detention center. Titled “The Room Where It Happens,” Episode 6 is a callback to the pilot when Robyn punished Delilah for shoplifting and lying by making her give back to the community and help girls her age who are less fortunate.

“That whole scene was a really important scene when we go to the juvenile detention center, because Delilah has been very privileged compared to those girls,” DeLeon Hayes tells TVLine. “And she hasn’t had her mom around. So she kind of thinks she can get away with certain things that really aren’t good for her and that could also put her in very dangerous situations considering the color of her skin. And I think us having that scene was just very pivotal.” 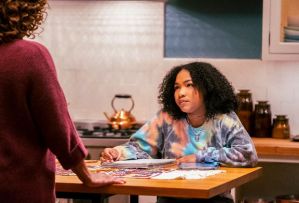 Because Delilah hasn’t spent enough quality time with her mom, a former CIA operative, she constantly tests the boundaries.

“It’s one of the first times Delilah is really understanding her mother,” the one-time Texan adds. “We get a lot of intimate and emotional scenes with Robyn and Delilah and that’s the start of them. And I think it was the perfect one to start with. Being a Black girl, you think you can do certain things your white friends or white counterparts can do, and you can’t. There’s just always different consequences and it’s good that we established that very early in the series.”

Delilah also has a civically minded side as demonstrated in Episode 4, “It Takes a Village,” when she took on City Hall in an attempt to get a pothole fixed. She’s also curious about what her mom really does for a living and has caught Robyn, a shadowy but benevolent fixer for folks who can’t go to the police, in a lie or two. Viewers can expect more of those types of exchanges as well.

“We have a heated scene that we did in Episode 106. Afterward, Queen was like, ‘You did that. You had me believing that you were really mad at me.’ But we always hug and joke after scenes like that,” DeLeon reveals. “Delilah is causing a lot of trouble, a little bit more than we’ve seen from her previously. And she also has a friend in this episode, which is going to be exciting.” 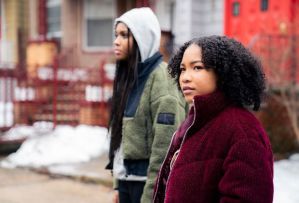 “I love to see Delilah with other 15-year-olds who are her age,” she continues. “She’s not going to just hang around with her family and have an attitude with her mom. You’re also going to see more of her compassionate side and also her trying to do things with that compassion that aren’t always best for her. You’ll get to see a lot more of that kind of energy, like when she took an interest in politics, in upcoming episodes.”

Unlike CBS’ original The Equalizer, which aired from 1985-1989 and starred the late Edward Woodward as a retired CIA agent, Latifah’s character is a divorcee who lives with her daughter and her Aunt Vi (Lorraine Toussaint). She has a former handler, William Bishop (Chris Noth), who helps out, and two sidekicks (Liza Lapira’s Mel and Adam Goldberg’s Harry) who have her back. But as Latifah has noted, she is especially proud of what Toussaint and Hayes bring to the show.

“We see three generations of Black women, not just one,” she says. “The world needs to see what life is like for us.” 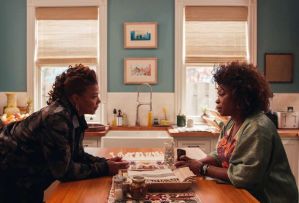 DeLeon agrees. “We don’t get to see that a lot on television,” the Raven’s Home alum observes. “I know so many aunts and even grandmothers who have really taken a crucial role in raising children with single moms. The fact that we get to show Black women doing that on television, especially on network TV, is so important. Queen is a great Equalizer and I knew she would be from the first script. And Lorraine Toussaint is amazing as Aunt Vi. I love seeing all the tweets about her.”

The Equalizer also challenges and enriches DeLeon, she says. For example, in Episode 2, “Glory,” she got to flex her rap skills, an unexpected opportunity that still makes her smile.

“I didn’t know I could rap,” DeLeon says with a giggle. “I got to set and they were like, ‘In this next episode, we kind of want you to rap.’ And I was like, ‘Rapping? I’m not going to say no.’ And that episode was so much fun. That was a blast. They put a lot of trust in me on the show, which is great. 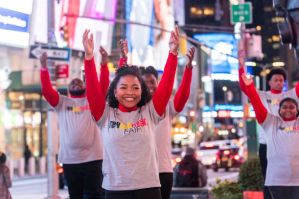 “We filmed that portion of it when we did the performance, before we got Queen’s reaction,” she recalls. “So she wasn’t there for when we filmed the actual performance scene. Afterward, she was watching the end of us filming and she gave me her approval. She was like, ‘Girl, you did that. You did that.’ This is Queen Latifah that we’re talking about, so, I must be pretty good.”

Want more scoop on The Equalizer, or for any other show? Email InsideLine@tvline.com and your question may be answered via Matt’s Inside Line.