Whenever someone talks about Showtime’s crime drama City on a Hill, the conversations often focus on the intense confrontations between Jackie (Kevin Bacon) and Decourcy (Aldis Hodge).

While those brainy battles drive the show, the tension that is building between Decourcy and his wife Siobhan (Lauren E. Banks) is in many ways equally intriguing, if not more so. The chessboard that is their marriage took center stage on Sunday’s installment, titled “I Need a Goat.” In it, Siobhan argued with Decourcy about their plans to start a family.

She’s ready, and he’s not. The back-and-forth came to a head at a restaurant when Siobhan placed a bottle of Robitussin on the dinner table at a restaurant. According to Siobhan’s friend/doctor, if Decourcy takes Robitussin, or “‘tussin,” as it’s referred to on the street, it will help his sperm motility.

Of course, Decourcy, who had just come back to the table after bickering with a work foe, wanted nothing to do with the ‘tussin and gave his wife the best staredown City on a Hill has ever shown. The brilliantly executed dialogue-free rebuff was so intense, it unnerved the waiter and fans on Twitter alike, some of whom took Decourcy’s side and some of whom took hers. 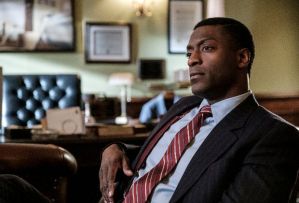 “We didn’t spend much time rehearsing those scenes,” Hodge tells TVLine. “We simply played the honesty of it. Ever since the first season, improving their relationship and bringing more honesty into their reality has been one of my top priorities. Between the creative team listening and being collaborative and the director trusting us to give the performances the air they needed to breathe, we have what we have.”

Banks agrees and recalls laughing between takes to help keep things light off-camera. She also notes how the majority of folks taking Decourcy’s side on social media were men, and those supporting her character Siobhan were women.

“I’m laughing because the fellas on Twitter were not in support of Siobhan’s approach in this scene, while the ladies were of the mind that Siobhan was simply doing what needed to be done,” she says with a chuckle. “Siobhan and Decourcy agreed some time ago on starting a family, but they’re having trouble getting things moving. You know, connecting the dots, getting the job done, and it’s not for a total lack of trying.” 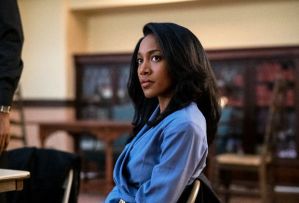 The cough syrup scene also foreshadows more disruption in their happy home when Siobhan takes on a client that puts her in Decourcy’s professional crosshairs.

“I think this particular line of demarcation, though silly, carries a bit more weight, because it cites a motif you’ll continue to witness between Siobhan and Decourcy,” Banks says. “It’s the tug-of-war between the decisions and ideas that have the ability to move them forward towards their goals and dreams versus those that hold them back within their regrets and traumas.”

Siobhan later takes on Kelvin (Kameron Kierce) as a client as a favor to his mom Grace (The Deuce‘s Pernell Walker). Of course, neither Siobhan nor Grace know that Kelvin, though wrongfully profiled by the police, was involved with the shooting death of an 11-year-old girl. Making matters more complicated, having Kelvin as a client makes Siobhan opposing counsel for Decourcy.

“Kelvin is a kid Siobhan has watched grow up from afar, much in the same way that Grace once witnessed Siobhan grow up,” Banks explains. “Grace was an activist and organizer at the same time as [Siobhan’s mother] Eloise Quays-Hastings was very active in the community. Their personal connection, as well their current working relationship, is the basis for a trust and admiration Siobhan has for Grace. Making sure Kelvin has proper representation is what’s necessary to keep things moving, and that’s a position she’s equipped and ready to fill.”

And in the weeks to come, Siobhan’s decision will put a greater strain on her relationship with her husband. So much for that Robitussin.

“It definitely presents new challenges for them in their relationship and takes them through a completely unexpected journey,” Hodge adds. “And through that, we get to see a very unique perspective of how a couple can deal with life’s new challenges. The clear lines we normally don’t cross to keep a relationship healthy may now seem a bit blurry.”