BTS Performs ‘Dynamite’ at 2021 Grammys — Watch and Grade It! 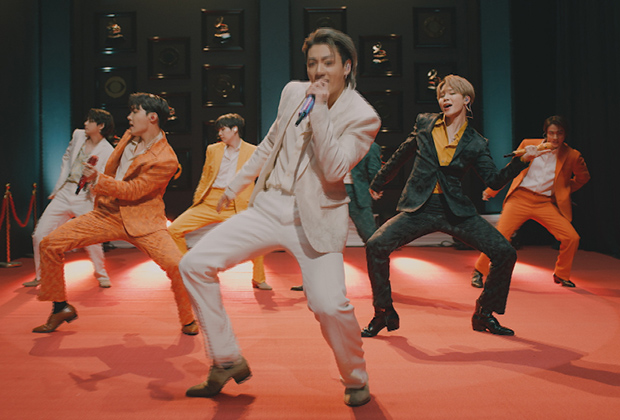 Two years after first stepping foot on the Grammys stage as presenters, the boys of BTS returned at the end of Sunday’s ceremony, lighting up (a recreation of) the Los Angeles Convention Center like… well, you know.

Jin, Suga, J-Hope, RM, Jimin, V and Jungkook came together for a crowd-pleasing performance of their smash hit “Dynamite.” Not only does this mark BTS’ debut performance on the Grammys stage, but the group is also nominated for its first-ever Grammy Award this year — Best Pop Duo/Group Performance for “Dynamite.”

Watch footage of BTS’ performance below, which will be replaced by an official video if/when it becomes available:

#BTS perform their smash hit “Dynamite” at the #GRAMMYs. pic.twitter.com/xDPxHK8Vzt

The 63rd annual event is being hosted by The Daily Show‘s Trevor Noah from the Los Angeles Convention Center.

Your thoughts on BTS’ Grammys performance? Grade it below, then drop a comment with your full review.