Batwoman Boss Previews Safiyah’s Arrival: Prepare to Meet ‘The Woman Who Made Alice Who She Is’

Safiyah has only been referenced by name so far on Batwoman, but about to finally going to meet the person behind that scary reputation.

Played by Shivaani Ghai (Dominion), the criminal mastermind from the island of Coryana is headed to the CW series in Episode 3 (airing Sunday at 8/7c) — and according to showrunner Caroline Dries, she at first might not appear to be the terrifying Big Bad that Alice has made her out as.

“Safiyah is more than a villain. She is surprising, she’s maternal, she’s one with nature… she’s gentle, she’s kind, she’s soft spoken, she’s alluring and regal… and you’re just kind of drawn in to everything she says,” Dries tells TVLine. “The idea of her being the big scary villain that Alice is afraid of in Season 1, it’s hard to reconcile that with the woman we meet in Episode 3.” 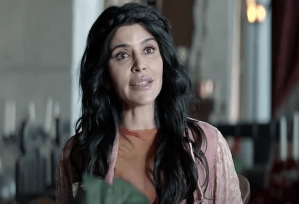 Safiyah will pop up in Gotham for a long-awaited reunion with Alice (Rachel Skarsten), who, in an effort to catch her adversary’s attention, just last week helped the Bat Team save Gotham from poised bats infected with the same toxin used to kill Mary’s mother. As Tatiana (Manifest‘s Leah Gibson) revealed in that grimy alley, Alice’s plan worked and now she’s on her way to meet her maker. Alice’s attitude is a complete turnaround from Season 1, in which she virtually quaked with terror at the mere mention of Safiyah’s name. But now that Alice lost everything she’s ever cared about (including “brother” Mouse and MIA twin sister Kate), she has nothing left to fear.

“The dynamic has changed,” says Dries. “Alice really has nothing to lose at this point and so she’s coming up against Safiyah with a bone to pick. What’s fun about their dynamic is that we’re used to Alice being the smartest person in the room, and we actually get to meet the woman who made her who she is.”

Are you excited about Safiyah’s arrival in Episode 3? How do you think her meeting with Alice will play out? Let us know in the comments below!