American Idol Recap: Katy Perry Meets Her Twin ‘At Last,’ Plus More of the Best and Worst Auditions From Week 2

American Idol‘s second round of Season 19 auditions did not feature any more children of disgraced political figures, but it did introduce us to a girl who kind of looks like Katy Perry. And that’s not nothing.

The look-alike in question was 17-year-old Hannah Everhart, who charmed the judges with a lovely (if somewhat reserved) rendition of Johnny Cash’s “Wayfaring Stranger.” She had an interesting tone to her voice, but the judges needed to hear more.

They were slightly more impressed with her work on Etta James’ “At Last,” but the amount of coaching and encouragement this took has me wondering how Everhart will fare when the competition gets tougher.

Watch her audition below, then read on for a breakdown of 10 other memorable singers continuing through to Hollywood:

AMANDA MENA, 18 | This week’s first golden ticket went to Mena, an undeniable star who opened the episode with a killer rendition of The Beatles’ “Golden Slumbers.” In addition to earning that coveted sheet of paper, Mena was also dubbed “one of a kind” by a very impressed Perry.

AMMON OLAYAN, 17, and LIAHONA OLAYAN, 16 | This magical, musical brother-sister duo — the eldest of eight kids! — discovered their songwriting abilities while living in tents and raising goats. And in front of three slack-jawed judges, they demonstrated those talents with one of the best original songs I’ve heard on Idol in a long time (maybe ever?), a radio-ready jam that earned them unanimous yes’s across the board. The only hiccup, which I’m now predicting will result in a dramatic cut during Hollywood Week, is that older-brother Ammon needs to work on his delivery.

ANTHONY GUZMAN, 27 | No one, least of all the judges, would have guessed that this “modern Viking” was packing a set of pipes befitting an old-school crooner — especially since he was introduced via an over-the-top Avengers parody. “Don’t judge a book by his hammer,” Perry mused before giving him one of his two yes’s. (Despite Guzman helping Bryan get back to his Scandanavian roots, it was a no from him.)

CALVIN UPSHAW, 26 | The judges were really feeling this audition, an emotional performance of Calvin Richardson’s “Falling Out.” It was a little hard to tell whether the judges were fully sold on the song, or if they were just overcome by his heart-tugging backstory, but they sent him through either way. 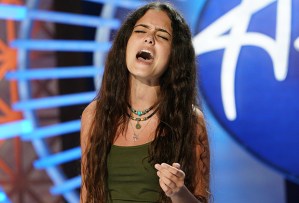 CASEY BISHOP, 15 | This star-in-the-making was full of wonderful surprises, from her taste in music (Nirvana, Red Hot Chili Peppers, Sublime, etc.) to her powerhouse vocals. The judges enjoyed her countrified Motley Crue cover, but they loved her follow-up performance, a rendition of Ella Fitzgerald’s “My Funny Valentine” that was so good it literally made Perry giggle with delight.

YURISBEL, 25 | The judges have made some questionable decisions this season, but sending this “Cuban Cookie Monster” through to Hollywood might top them all (so far). Sure, he had a lot of energy, but so do bar mitzvah hype dancers. Where are their golden tickets?! Anyway, catching up with this guy in Hollywood Week should be… interesting.

CHAYCE BECKHAM, 24 | Another clear Top 10 frontrunner, this charmingly unconfident heartthrob has the kind of gravelly voice that quite simply gets you pregnant. And Kolton Moore & The Clever Few’s “What Brings Life Also Kills” was the perfect vehicle to show it off. Beckham better say his goodbyes to Apple Valley (there aren’t even any apples!) because he’s got a long future in this competition.

CASSANDRA COLEMAN, 24 | What is there to say about this musical angel, who blew the judges away with a powerful performance of The Killers’ “The Way It Was”? I kept trying to place her sound, but Bryan put it best: “You are a new voice that the world has never heard.” 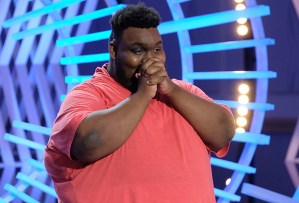 WILLIE SPENCE, 21 | Not since the days of La’Porsha have we been treated to a “Diamonds” cover of this magnitude, but while she used the song to show off her lower register, Spence shined with his soaring high notes — the perfect cap to what felt like an extremely long night of auditions.

* While this recap focused solely on the contestants who made it through to Hollywood, can we take a minute to talk about Ace Stiles, the boy with the “quirky, vintage” voice who shared his story of coming out as transgender at 14? I’m not saying that I disagree with the judges’ decision that Ace needs a little more confidence and life experience to develop as an artist, but the whole segment felt a little… is exploitative too extreme of a word?

Which singers are you rooting for after Week 2? Vote for your favorites in the poll below, then drop a comment with your thoughts on the auditions below.