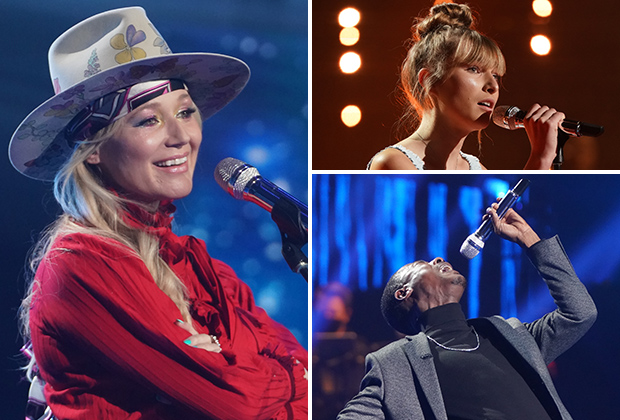 The second half of American Idol‘s Top 24 sang for viewers’ votes on Monday, taking the stage opposite some true music icons, from Jewel and Josh Groban to Incubus frontman Brandon Boyd. (Guys, remember Incubus?!)

Read on for our breakdown of the night’s performances, with video for each:

JASON WARRIOR, 25 | The first solo performance of the night, The Weeknd’s “Call Out My Name,” may have started out smooth and chill, but things took a very sudden, very emotional turn. By the end of Warrior’s performance, he was on his knees, seemingly in tears. When he met with duet partner PJ Morton, he asked how he can take his music outside the walls of the church. The solution, apparently, was to bring the church to Idol, resulting in a truly unexpected take on the Bee Gees’ “How Deep Is Your Love.” There’s no denying Warrior’s natural talent (Lionel Richie even said, “It does not get any better than that”), but sometimes I wonder if Warrior needs to lay it on so thick with every performance. A little variation never hurt anybody. Click here to watch.

MADISON WATKINS, 26 | First of all, Watkins managed to change my (previously negative) opinion about Justin Bieber’s “Holy,” which is a feat in and of itself. It was a good choice for her solo, as it felt current and showed off quite a bit of her range. Tori Kelly was also an inspired choice as Watkins’ duet partner for Stevie Wonder’s “Don’t You Worry ‘Bout a Thing,” even if she suffers from Ryan Tedder syndrome. (We already know Kelly can sing. She didn’t need to totally outshine her partner with those runs.) Luke Bryan called her a “natural entertainer,” while Richie commended her for reacting to what Kelly was doing, instead of focusing on her own prepared part. Click here to watch.

BEANE, 23 | I feel like we’re really witnessing an artistic evolution with Beane, even if his borderline cheesy performance of Dua Lipa’s “Don’t Start Now” reminded me that, oh yeah, he’s definitely a wedding singer. Robbie Williams’ “Angels,” which he then sang alongside Groban, was a much better fit. He opened his mouth and loveliness poured out, complementing Groban’s voice perfectly. (I was not expecting him to be able to hold his own opposite Groban, but he totally did.) Extra points to Beane for swapping “she” with “he” as an act of “defiance.” Watch:

HANNAH EVERHART, 17 | I genuinely enjoy this young star on the rise, so it pains me to say that her solo performance of Chris Stapleton’s “I Was Wrong” was… not her best. She was then introduced to Jason Aldean, with whom she shared some ribs before sharing the stage. The judges enjoyed what she put forward, for the most part, but they urged her to believe in herself more. Frankly, I’m just disappointed that we never found out about the chicken she was supposed to send Claudia Conway via FedEx “dead or alive.” Which one was it, Everhart?! Click here to watch.

MARY JO YOUNG, 19 | Real talk: I’m so sick of hearing Ed Sheeran’s “Castle on the Hill,” so I appreciated that Young at least switched things up a bit in order to show off her range. And don’t even get me started on her duet with Jewel. I was already excited for “Foolish Games,” and that was before my ears were blessed enough to hear their voices on it together. The tight harmonies, the growling, the hat — all of it! I’m pretty sure I blacked out during this performance, and when I came to, I saw that I had just written “Yes! Yes! YES!” over and over. It was that good. Watch:

CHAYCE BECKHAM, 24 | Oh, another Sheeran song? You. Don’t. Say. Beckham picked “Afterglow” for his solo performance this week, and while it wasn’t incredible, it was definitely solid. As Bryan noted, it kind of felt like Bruce Springsteen’s take on the song. I’m not sure I would have paired him with Boyd for his duet, as their polar-opposite voices struggled in the blending department, but it was still a good performance. And I’ll take any excuse to revisit “Drive.” Click here to watch.

COLIN JAMIESON, 22 | It’s easy to forget how high most Bruno Mars songs are, since he makes them sound so effortless, but those notes aren’t easy. Yet Jamieson managed to absolutely slay “Locked Out of Heaven” without breaking a sweat. (That said, I kind of wish he hadn’t bothered to pick up the guitar midway through, as it only took away from his incredible vocals.) Then came his duet with Kelly, who apparently only teams up with other heads of luscious hair. And while their collective hair game was definitely strong, their vocals on “Hollow” were even stronger. This was one of the best duets of the night for me. Watch:

LIAHONA OLAYAN, 17 | I’ve felt that this firecracker has been radio-ready and highly marketable from Day 1, and her solo performance of Audrey Mixa’s “Just Friends” only served to reinforce that belief. Joining Morton for a dramatic duet of “Say So” was a risky move for Olayan, who admitted to having a fear of showing her vulnerability, but it was definitely worth it. She held her own on stage with Morton, and the judges were right to celebrate how far she’s come. Click here to watch.

AVA AUGUST, 15 | The irony of August performing Olivia Rodrigo’s “Drivers License” as her solo, when she herself isn’t even old enough to operate a car on her own, is not lost on me. And neither is August’s incredible voice, which holds a beautiful quality well beyond her years. Come on, if you can give Groban chills, you know you’ve got it. Joni Mitchell’s “Both Sides Now” was an inspired choice for a duet, and the end result was absolutely stunning, like it was meant for her to sing. The judges likened her to Judy Garland, which I hadn’t considered. I have, however, considered how stupid I was for not including August in our (extremely) early Top 10 predictions list. I’m really kicking myself for that one. Watch:

CALEB KENNEDY, 16 | Remember how tough Bryan was on Alex Miller earlier this season, constantly trying to steer him away from old-school country in the hopes of discovering a fresher sound? That’s kind of how I feel about Kennedy, who delivered a good — but not terribly exciting — cover of The Allman Brothers Band’s “Midnight Rider.” His duet, “Fly Over States” opposite Jason Aldean, was also kind of a snooze-fest. The judges clearly disagree with me, as they praised Kennedy for being “possessed by a very old, seasoned countryman.” Is that really a good thing for this competition? Click here to watch.

HUNTER METTS, 22 | When I first saw that Metts was taking on Sia’s “Chandelier,” my head cocked to the side like a tiny dog trying to understand human-speak. But once he began his stripped-down take on the ubiquitous jam, I started to get into it. I did find it a bit sleepy, though, and I noticed that not a single judge stood up for it. Metts got a second shot, duetting with Jewel (who immediately drew the Ryan Phillippe comparison) on the singer’s timeless classic “Foolish Games.” She challenged hm to deliver a big vocal moment, but it never quite manifested, resulting in a performance that really only showcased Jewel’s voice — which sounds better than ever, by the way. I actually thought the judges were too nice about this one. Where’s Simon Cowell when you need him? Click here to watch.

CASEY BISHOP, 15 | Best solo of the night? Best solo of both nights? Either way, Bishop sang the hell out of Paramore’s “Decode,” and the producers knew exactly what they were doing when they chose to end the night with her. I wish she had been paired with Jewel for her duet, but Boyd wasn’t a bad choice — nor was “Wish You Were Here,” a song I haven’t thought about in at least a decade. This girl is Top 5 material, no question. Watch:

Of the contestants who performed tonight, which eight (8) deserve a spot in the Top 16? Weigh in via our poll below, then drop a comment with more of your thoughts.