The Voice UK: Viewers CONCERNED for Gavin Rossdale after opening performance ‘Is he ok?’ 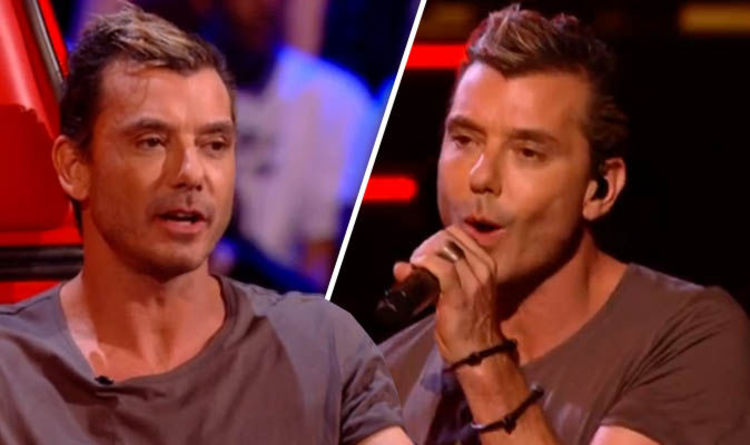 The singer could be seen giving an energetic performance of Freedom alongside Jennifer Hudson, Tom Jones and will.i.am.

But while he appeared in high spirits during the show’s opening, many viewers were quick to express their concern for the judge after watching his dancing.

Fans of the ITV singing competition took to social media to ask if the Bush frontman was okay while many others claimed they were cringing at his behaviour.

One viewer tweeted: “#thevoiceuk Is Gavin ok? He looks like he’s having some sort of seizure.”

While another added: “Get a doctor pretty sure Gavin was taking a fit on stage #thevoiceuk.”

Someone else continued: “#thevoiceuk I don’t know why but Gavin makes me cringe, esp tonight with the dad dancing (sic).”

A fifth shared: “Gavin should not dance! If you can call that dancing. #thevoiceuk.”

Gavin is the only judge in the competition without an act in the final round after Max Vickers and Truly Ford were sent home after last week’s semi-final.

He was left looking slightly red-faced as he was awkwardly asked by by host Emma Willis how he would spend the final.

“Are you going to be impartial?” she probed the 51-year-old.

“Of course,” he assured her. “I’m going to see who brings it and enjoy each and every act.”

Speaking about their career prospects at the start of the year, Anna-Jane admitted there was plenty in the pipeline but now it’s all been...

This Is Us Premiere: EP Promises Answers About That Huge Randall-Related Reveal Will Come ‘Quickly’

Warning: This post contains major spoilers from This Is Us‘ Season 5 premiere.  This Is Us isn’t content to rest on its Laurel any...

ITV's Lorraine has long been a pinnacle of daytime TV, with the Queen of daytime herself fronting it. But it appears Lorraine Kelly may...

Singer/actress Demi Lovato has added hosting the 2020 E! People’s Choice Awards to her calendar. Lovato will take the reins of the...

CBS’ NCIS, Blue Bloods and Others Get Shorter Seasons Amid COVID Delays

More than a half dozen CBS series are set to produce shorter seasons, as the result of COVID-related delays, safety measures and other...