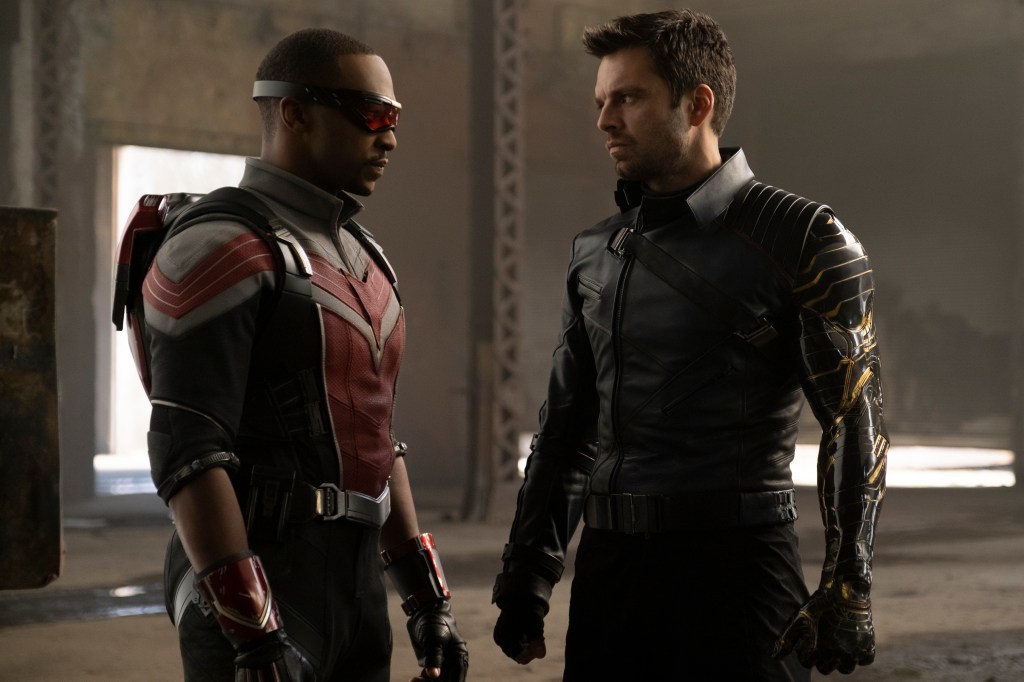 Sam Wilson (Anthony Mackie) and Bucky Barnes (Sebastian Stan) step out on their own in The Falcon and the Winter Soldier, which is set to premiere Friday, March 19 on Disney+. New photos tease an action-packed adventure for the mismatched Marvel duo.

The upcoming series, which takes place after the events of Avengers: Endgame, finds Sam and Bucky navigating a world post-Steve Rogers’ Captain America. The six-episode series is described as a “cinematic experience” that will see the pair team up for “a global adventure that tests their abilities — and their patience.” Expect plenty of action — and even some comedic moments — from this truly entertaining pair.

Head writer and executive producer Malcolm Spellman previously opened up to TVLine about how race will be a core part of the show’s storyline through Sam, who is Black and weighing the heavy decision to take up the Captain America mantle. (Rogers handed him the Cap’s shield in Endgame.) Spellman hopes the show will positively impact Black youth much like 2018’s Black Panther.

“I believe that Falcon and the Winter Soldier is a nice progression with the mantle that [Black Panther director Ryan] Coogler and Chadwick [Boseman] left us,” Spellman said. “I really do believe that these giant Black icons are necessary, not only for Black kids, but for white kids to start to absorb — our people as being big and heroic.”

Alongside Mackie and Stan, The Falcon and the Winter Soldier will also feature Emily VanCamp reprising her role as Sharon Carter and Daniel Bruhl returning as Baron Zemo. In addition, The Enemy Within‘s Noah Mills and Supergirl‘s Carl Lumbly are set to appear in unspecified roles, and Lodge 49‘s Wyatt Russell is set to portray John Walker (who adopts the superhero alter egos U.S. Agent and Super-Patriot in the comics).

Check out the new first-look photos in the gallery on the right — or click here for direct access — and then hit the comments below to share your first impressions.