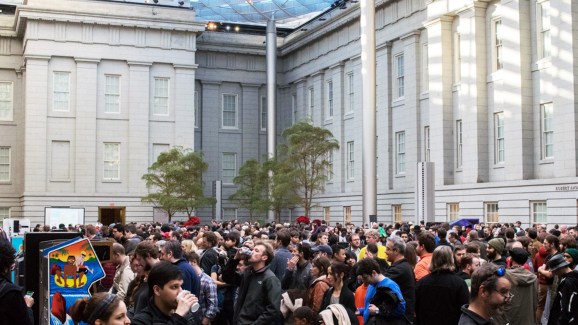 On the weekend of August 5, the Smithsonian American Art Museum Arcade will showcase 40 indie games at its third annual event in Washington, D.C. It’s free to the public and, along with showcasing indie games, it has an educational bent and will feature workshops and student work.

“The first year of the arcade was a local-developer-only show to test the idea of how we’d run such an event and that drew about 4,000 visitors,” said Chris Totten, one of the organizers of the event, in an email. “Last year, we opened it up to all U.S. developers and got international submissions and that show attracted 11,750 people.”

SAAM Arcade is an official Smithsonian American Art Museum event with help from American University’s Game Lab division as well as the local Baltimore and Washington, D.C., chapters of the International Game Developers Association. All the games are selected by a panel of industry veterans that judged over 150 submissions based on a number of factors such as aesthetics, novelty, and polish.

“Every year we look for a different ‘theme’ in our collection,” said Totten, who’s also the game artist in residence at American University. “In this year’s crop of entries we saw many varied art styles that represented lots of different ways of presenting a game, so this year’s collection presents a cross-section of how games can differ visually both on and off of a digital screen.”

This isn’t just about traditional video games; the event will also spotlight pinball machines, card games, virtual reality, and games with alternate controllers. Tiller Teller, for instance, is an educational story-driven game that players interact with using a physical cube made of felt. Another is Loominary, which riffs off Greek mythology and uses an actual loom as its controller.

In a way, Totten says, the older games on display like Pacman and Donkey Kong are a gateway to the more experimental works.

“What you get is a showcase designed to draw people in with nostalgia but challenge their notions of games by having them meet real game developers and then see games with alternate controllers or other exploratory elements,” said Totten. “We also offer game making workshops during the event so interested attendees can learn to make their own stuff and hopefully showcase their own work with us in the future.”

The workshops cover topics such as how to make a retro arcade game or board games. Education is high on the list of priorities for the event.

“A major goal of the event since its inception has been educating the public on what games are and what they can be and attracting new audiences to games and game making,” said Totten.

This is also the first year that SAAM Arcade is involving student developers. Ten of the 40 games from students, showcased next to games like Perception by The Deep End Games, a group of industry veterans that has worked on hits such as BioShock.

“This is the first year for the track so we’re testing it for future iterations but we’re very happy with how it’s turned out,” said Totten. “We haven’t worked closely with any institutions yet but were happy to see submissions from pretty far and wide.”


Thanks for your interest in the PC Gaming channel

How Your Business Benefits From A Commercial Intercom System

If you own industrial properties, you understand the significance of an industrial intercom gadget at your homes. But did you feel you may...

How to Help Your Business Work Remotely Better

Remote work has become the culture of the day, especially with the spread of the pandemic. You will agree that though many people were...

5 Tips for Investing in Real Estate

If you're looking for a great way to add to your income, real estate may be right for you. This is an area where you can make a lot of...

5 Easy Steps to Get the Career You Really Want

Do you want a step-by-step plan on how to get the career you want? Do you know that you can get the exact job you want by following the...