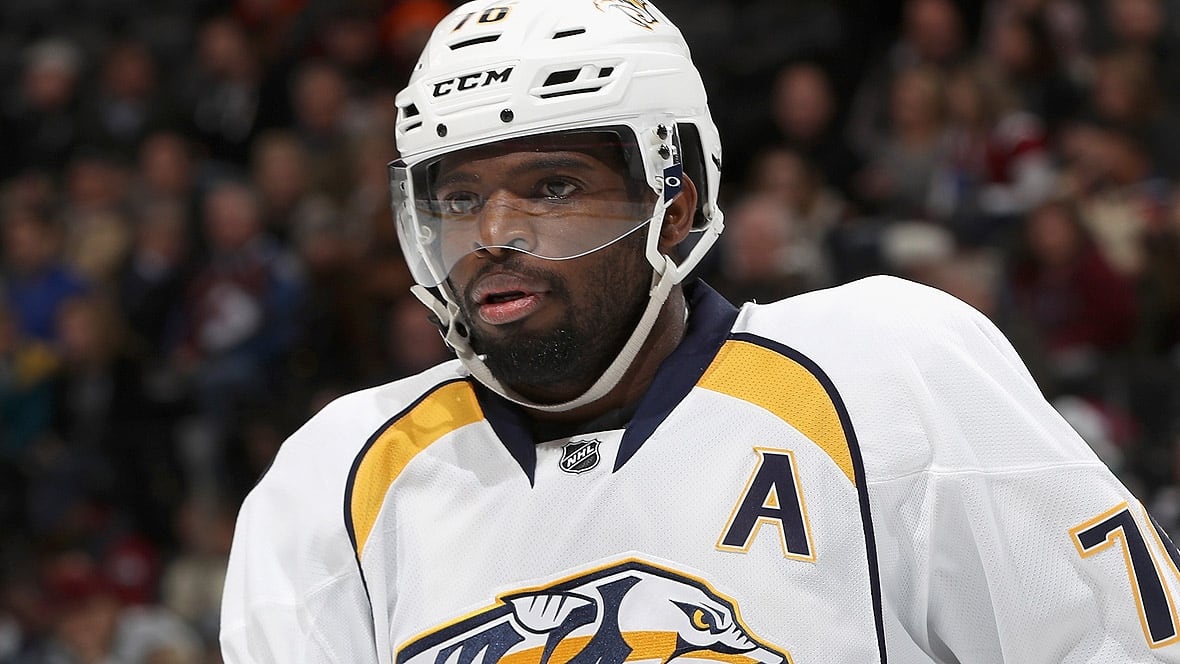 ​P.K. Subban has made 481 regular-season appearances in the NHL, though the feel of Thursday night’s game promises to be like no other.

He will skate on the Bell Centre ice in Montreal wearing a Nashville Predators jersey to battle his former Canadiens teammates for the first time since he was traded for fellow all-star defenceman Shea Weber last June 29.

“It’ll be different emotions that maybe I’ve never felt before playing a game in the NHL,” Subban, who missed the Predators’ 2-1 loss to Montreal at Nashville on Jan. 3 with an upper-body injury, told reporters earlier this week. “I just want it to come and then I’ll react and respond the natural way … whether that’s to be excited, whether that’s to be nervous.

“My guess … is that I’d be excited. It’ll be a fun night and a memorable one.”

A fan favourite, the Toronto native gave fans plenty to cheer about during his six seasons in Montreal, displaying a skill and flair on the ice, scoring 63 regular-season goals, 11 in the playoffs and twice helping the Canadiens advance to the Eastern Conference finals.

After having his first season in Nashville derailed by injury and related inconsistency, Subban returns to Montreal healthy and playing at, or near, the top of his game, having finished tied for third among NHL defencemen with 12 points in 13 February games.

“He’s putting points up on the board on a regular basis,” said Predators general manager David Poile of the 27-year-old Subban. “I think the best is yet to come for us and P.K.”

But neither is resting on its laurels, with Canadiens GM Marc Bergevin trading for Dwight King, Steve Ott and Brandon Davidson, among others, ahead of Wednesday’s deadline. Poile added offence in 27-point man P.A. Parenteau, but many of the 40,000 or so eyes Thursday will be on Subban and Weber.

The 31-year-old Weber holds a slight edge with 37 points on 14 goals and plus-9 rating, while Subban checks in with eight goals, 30 points and minus-6 rating in 47 contests.

‘It’s a privilege to be a player who is traded out of Montreal and still have this type of support.’— Ex-Canadiens defenceman P.K. Subban on his 1st return to Montreal

Away from the rink, Subban’s continued work in the community has only enhanced his popularity in Montreal.

He visited the Bell Centre on Wednesday to receive the Meritorious Service Decoration from Governor General David Johnston for his charity work, spoke at a packed news conference and stressed he would always be connected to the city.

In September 2015, Subban made a pledge to raise $ 10 million over seven years for the Montreal Children’s Hospital to support families of sick kids. More than $ 1.4 million has been raised for a program called P.K.’s Helping Hand through the P.K. Subban Foundation.

“It’s a privilege to be a player who is traded out of Montreal and still have this type of support,” said Subban, the 2013 winner of the Norris Trophy as the NHL’s top defenceman. “I’m very honoured and happy that … fans still support me and are behind me.”

Subban is well aware of what Thursday’s game means in the Western Conference standings as the Predators hold a slim one-point lead over Calgary for the first wild-card playoff spot. He also hopes to see Madame Beliveau seated three rows behind the Montreal bench. Subban was a favourite of Elise Beliveau, widow of late Canadiens great Jean Beliveau.

Elise Beliveau and others at the Bell Centre are likely to see Subban in a different role than the blue-liner responsible for engineering Montreal’s attack. In Nashville, he’s one of several smooth-skating defencemen with that capability.

“The styles are different,” said Subban, who will be recognized by the Canadiens on Thursday night. “In Montreal … if I wasn’t scoring goals, it’s like, ‘Why aren’t you scoring?’ It’s a little different [in Nashville]. It’s about producing offence, not about who scores the goal.”