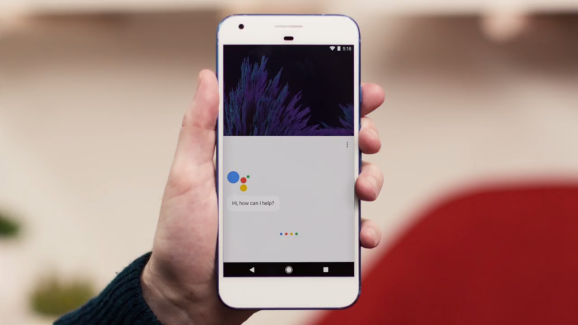 Bots talking to apps is not new, but a Google property that works with an Apple property in a fluid and seamless way is kind of earth-moving. It’s not as big as a recent move by Amazon to partner with Microsoft and trigger the bots from each company by voice, but we can see where all of this is going.

In a new update for the Apple Music app on Android, you can now control your music using “OK Google” commands. I tried this by asking Google to play the latest albums by Frightened Rabbits, Dawes, and several others and it worked every time with no problems.

The disconcerting part here is that this isn’t just a feature in the app itself that lets you control playback by voice. It’s integrated into the “OK Google” voicebot (the Assistant on the Google Home speaker — Google, you should really pick a better name for this). I used a Samsung Galaxy Note 8 and had no trouble asking it to pause the music, find artists, and even play the Beats 1 radio station. My only issue was that the Note 8 would sometimes not respond to my saying “OK Google,” but that’s not really a problem with Google or Apple.

As usual, I started wondering about what other things might work in a similar fashion.

For example, we know “OK Google” and Siri do not talk to each other. (Curiously, if you say “OK Google” to an iPhone or an iPad running iOS 11, Siri will tell you you’re talking to the wrong bot.) But let’s say there is more integration. What if Siri and Google actually got along?

For now, Apple Music is just an app on Android. In my car, with Android Auto connected (which arguably has a slicker interface than Apple CarPlay), I can control my music in the Apple Music app right now. Nice. I wondered what would happen if talking to Google meant I could somehow control my Apple TV in the living room (since that’s where I have most of my purchased movies). Or, since I tend to take more photos with my iPhone, if I could use “OK Google” to do a search using image recognition (which is far better with Google) within my photo library online or on an Android phone.

This cross-pollination might not make any sense, and the worlds of Google and Apple are nicely bifurcated, but for voicebots, there’s a problem. Just as band names will need to change (sorry, Sigur Rós, MGT, and Xiu Xiu, but no one knows how to say those names), voicebots will need to become more integrated. We don’t want to talk to 10 voicebots. We want to talk to one, and it should do everything and anything we want, regardless of the phone, platform, connection, location, or anything else. We want a bot that does it all.

Apple Music working with Google is not actually that important in the grand scheme of things — it’s just triggering the app — but it shows a willingness for bots and platforms to get along, for one world to talk to another world. It’s a signpost on the road to better compatibility.

At CustomPhotoKeychain You Can Choose from Various Design Keychains - Upload Your Photo to Design Your Own Keychain. Unique Gifts for Your...

The handmade paper with seeds produced using cotton fibers and disposed of during the industrial process is the plantable paper. Seeing the...

Once you have downloaded the pictures that you like, you will need to consider how you want to mount your picture tat. This is an important...