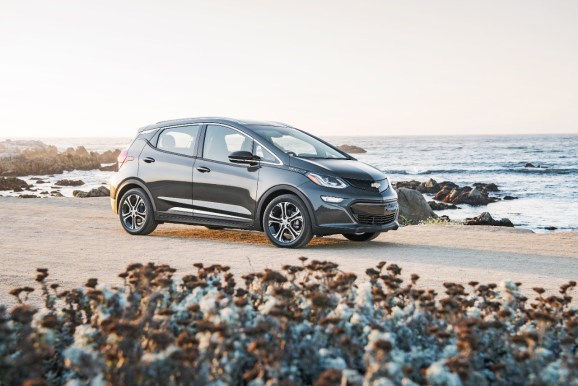 The title of the most popular vehicle in the electric car market has created a long and highly competitive race between Tesla and Chevrolet. Though the two brands offer vastly different versions of electric vehicles, they seem to be the two makes dominating electric vehicle sales in 2017. Reports show that the top spot for monthly electric car sales was taken by either the Chevy Volt, the Chevy Bolt EV, or the Tesla Model S for the majority of 2017.

The Tesla Model S is the current winner of overall sales for 2017, but the Chevy Bolt EV’s performance in October is an example of how Chevrolet is nipping at Tesla’s heels as a main contender for the most popular electronic car on the market. The Bolt EV had a spectacular sales month in October which pushed the vehicle far ahead of Tesla Model S sales over the 31-day period. If Chevy’s electronic models continue to grow at this rate, Telsa better start guarding its crown…

The Chevy Bolt EV maintained momentum from a high sales month in September, selling 2,781 cars in October. Tesla, however, saw a drastic decrease in sales. In September, the Model S took a significant lead on Chevy Bolt EV sales, selling 4,860 cars. In October, Model S sales took a nosedive with a reported 1,120 cars sold for the month.

Though the Tesla Model S is still winning the war on electric car purchases for the year as a whole, it’s important to note the battles won by its less luxurious competitors, the Chevy Bolt EV and the Chevy Volt. With little more than a lower price tag to sway consumers in the market for electric cars, the Bolt EV and the Volt have bested the Model S on monthly sales multiple times throughout the past year.

A battle between features and affordability

The Tesla Model S is arguably the coolest electric car on the market. The model comes standard with Dual Motor All Wheel Drive that includes a high-efficiency front motor and a high performance back motor to power the vehicle from zero to 60 in a mere 2.5 seconds. The model also has full self-driving capabilities and comes with an enhanced autopilot feature to support regular driving functions. Add in the clout behind the luxury car brand name and the sleek look and feel of the exterior and interior components, and you can see why this car is selling like hotcakes in the US. Although the Chevy Bolt EV has difficulty competing on the features and performance front, there is one important competitive edge Chevy maintains a tight grip on — affordability.

Tesla has struggled to ramp up production on its Model 3 which promises to add a more affordable option for aspiring Tesla owners. Though the Model S and the Model X come with incredible features and lavish luxury-car amenities, the models also come with high price tags starting above the $ 60,000 mark (even after tax incentives). This could serve as a strong deterrent for potential buyers in the US where the median annual income is $ 56,515. The Model 3 promises a lower price starting at around $ 35,000, but as Elon Musk has stated himself, the company is in “manufacturing hell” when it comes to the production of this more affordable model. Delays in the release of this model have even contributed to a decrease in Tesla’s stock value.

Chevrolet, on the other hand, has the production of affordable vehicles down to a science. This has proven useful when producing electric vehicles such as the Bolt EV and its sister the Chevy Volt. The price tag for the Chevy Bolt EV starts at about $ 36,000, which puts the final cost of ownership at around $ 30,000 after tax incentives. The Volt (which is also a top-selling electric vehicle in the US) offers an even more affordable option with models starting at $ 33,000.

However, while the Chevy models accommodate budget-conscious Americans, they have a hard time satisfying the needs of consumers who want more than a practical car to help them get from point A to point B. The Bolt offers front wheel drive only and is notably slower than the Model S with a record of reaching zero to 60 in 6.5 seconds compared to the Model S’s 2.5 second record. The car touts a long battery life and a solid UI, but at the present moment, lacks the self-drive and enhanced autopilot features Tesla is best known for in its Model S. And possibly most importantly for car snobs, the brand, and the overall design of the car don’t necessarily shout “luxury.”

Will the playing field remain level when the Model 3 improves production?

Although a high price tag has yet to stop Tesla from beating its lower-priced competition in an overall evaluation of electric vehicle sales for the past year, it could be a hindrance causing the carmaker’s sales to drop below its competition’s on a month-to-month basis. We see Tesla as the Messiah of electric vehicle production, but the brand’s competition is catching up in a big way with more affordable, practical options for electric car enthusiasts.

The Chevy Bolt EV and the Chevy Volt are stealing the hearts of Americans with a desire to own an eco-friendly car, but a wallet that requires a practical option. When the Model 3 is able to reach optimal production, will the playing field remain level? Although the stock versions of the model with no additional options will lack the speed and autonomous features of the Model S, they will carry Tesla’s luxury name and the sleek look at a price that is comparable to the Bolt EV.

We can see that consumers are torn between practicality and luxury features. Perhaps a model that combines a little of both will be Tesla’s key to holding onto its title of king of the electric car industry. Despite the many issues plaguing Tesla’s operations at the moment, a successful release of the Model 3 could help the carmaker hold onto its crown just a little longer.

Cosette Jarrett is the guest editor over the AI and Transportation channels at VentureBeat.

The pandemic has been hard on the entire restaurant industry across the world. In spite of that, the adoption of technology has kept some...

Being relevant to the modern alternative, steel furniture comes into existence as the latest trend. Throughout the Modern Period, steel and...

When creating a profile on spotify plaque

There are many reasons why people use social networking websites such as Twitter and Facebook. The most popular reason is to update your...