Chevrolet announced today that it will be returning to the Class 4 and Class 5 medium-duty truck sector, and it will do so with the Silverado name. The trucks will logically be called Silverado 4500 and 5500, much larger than their 1500 through 3500 Silverado light-duty pickup siblings. The company also released a teaser image, and fortunately for us, all Chevy did was take the photo in a dark room. So with Photoshop, we were able to adjust the exposure and reveal the truck’s nose (you can see the original version of the teaser below).

Create Your Own Home Oasis

Secrets  that  the  select  few  who  know  about  them  ancient  hermetic  science  of  magick.
$67.00
Read More
⇛ view similar products
How To Spray Paint Your Car 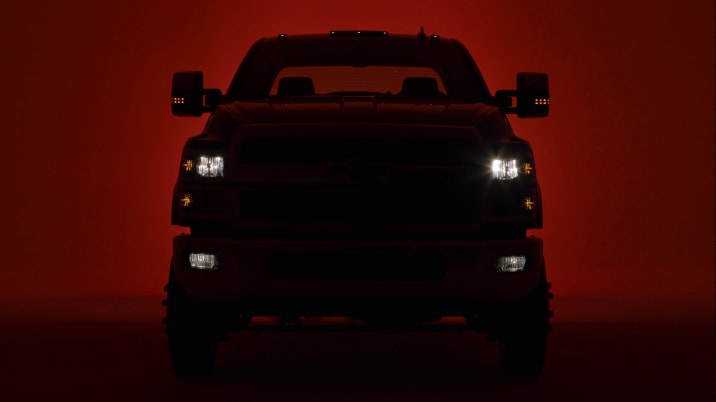 At least from the front, it looks like a pretty handsome thing. It blends design cues of the current Silverado with the last medium-duty truck Chevy sold, the Kodiak (and its GMC twin, the TopKick). It has split headlights and the classic cross-bar grille of the Silverado, but also the big-rig-style high hood that drops down toward the headlights.

Chevrolet didn’t reveal much about the new trucks’ specifications. All it said was that it would be available in regular and double-cab configurations, as well as offering two- or four-wheel drive. Powering it will be Duramax diesel engines with Allison transmissions. We can at least tell from the teaser image that it uses a solid front axle up front. We also assume that Chevy will only be offering this truck to commercial buyers, at least at first. We don’t expect the company to offer sales to private consumers, but we can’t rule it out completely. After all, International sold consumer-ready versions of its trucks in the form of the CXT, MXT and RXT. Chevrolet will reveal more details and images when the trucks make their debut at the Work Truck Show in Indianapolis in March.